Tonight's episode of The Flash gave viewers plenty of fun surprises, including the much-anticipated debut of Katee Sackhoff's Amunet Black.

In tonight's episode, 'Girls Night Out' fans were introduced to Amunet, after her name was dropped in the show's season four premiere. Also known as The Blacksmith, Amunet is the operator of an underground metahuman black market, the former boss of Caitlin Snow/Killer Frost (Danielle Panabaker), and a pretty powerful meta in her own right.

Katie Sackhoff joined ComicBook.com to chat about her approach to the DC Comics role, her costume, her unique relationship with Caitlin, and where Amunet could go in the future.

What drew you to playing Amunet?

It sort of was all the boxes that checked at once. I have been offered roles on a lot of these sort of comic book shows before, and I had very little desire to play a hero. I didn't want to necessarily sign a full-time contract with a near show as well, especially being on Longmire for the last eight years. I sort of wanted to have some freedom in my private life, actually, for a while.

And when I got on the phone with Andrew Kreisberg, he sent a picture of what they wanted Amunet to look like, sort of gave me the basis of her, because there's not a ton of source material there. And then he said the magic words, 'We'd be lucky to have you. What would you want to do?' And that was just such an amazing amount of freedom to be given to myself from somebody like Andrew.

So it was sort of like the perfect amount of everything that came together at the right time in my career, where I was looking to do something a little bit more fantasy-based after being on Longmire for the last eight years.

I'm so glad you mentioned how you came up with the accent, because that was definitely a highlight of the episode.

I've got to tell you, if it was Shakespeare, I would have been incredibly nervous. If I would have been in the UK doing an accent, I would have been absolutely terrified. The good thing about this show for me was that, because it is based in a fantasy realm, I had the ability to play with her and make her a lot bigger than you would expect her to be. Which just makes her more Joker-like and more fun to watch.

What was it like putting on that costume for the first time?

Isn't it brilliant? She actually shows boobies, which is not normal for The Flash, that she's got a little bit of cleavage showing through. Which is tame compared to her comic book costume. If you see her comic book costume, they sent this picture over of who she was, and I was like 'You guys, she's literally nude.' And they were like 'Obviously, you're not going to wear that.'

So when I showed up and they had this, it was absolutely amazing. And the jacket is just phenomenal. The wardrobe department on The Flash just absolutely knocked it out of the park.

And we had to slowly sort of alter it a little bit. Everything is very stretchy, because of the movement that she has to have. And so we really had to suspend things. We had to take in the pants a lot, we had to sort of let out the top. We had to really finagle her as we go along. The costume keeps changing every episode, just to make it more breathable and movable.

But her boots, I don't even know where they found those. I think they literally got them at an S&M shop. Like those are real boots. They didn't make them. Those exist. And they're like seven inch boots with metal hands on them. It's the weirdest thing ever. They look like they actually belong in Riddick, like in the Underverse. Which is sort of funny, considering they're both sort of underlords. But that's sort of where it looks like it belongs, in that sort of world.

The Amunet and Caitlin dynamic was definitely a highlight of the episode. Since The Flash loves to deal with multiverses, do you think there's another universe where the two of them aren't at war with each other, and might be more on the same page?

Oh gosh, I've never even thought about that. But yeah, we don't really know where Caitlin was, or Killer Frost was for a little while. I do think that there is a backstory there that we could explain at some point. I do think that it's realistic to think, and we hint to it, that she was working for Amunet.

I don't think that Amunet is inherently evil. I just think that she is a businesswoman and she's an opportunist. And right now, she just is mean. And will kill you. But she also really enjoys her job, you know? I mean, that's the thing that I love about her, is that she's evil because she likes it. It's fun.

What can you tell us about her next plan? I know she said she plans to 'ruin something of Caitlin's' in the near future.

I think, in all honesty, what Amunet wants is Caitlin's muscle. She's said as much. She wants her to be her partner. She thinks that together, the sum of the parts is greater than them separately. And I think that Amunet has a lot of respect for Caitlin, or for Killer Frost. There's a scene coming up in episode nine where she says as much. She really sort of has this intense admiration of who Killer Frost is, and more so Caitlin, actually. And I think that Amunet ultimately, like I said, she's a businesswoman, and I think she sees opportunity and money there. 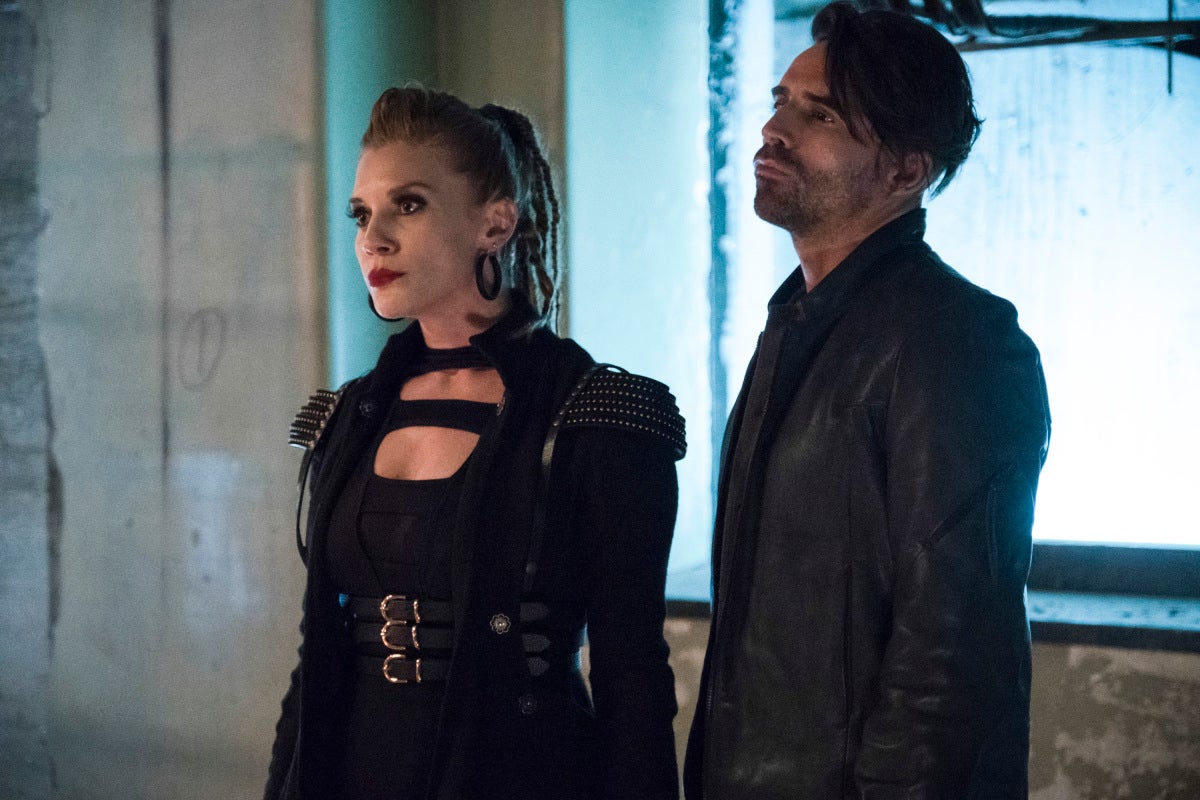 In the premiere, people noticed that Norvok has knuckle tattoos that match The Thinker's face tattoos. What can you say about a possible connection between Amunet and The Thinker?

I think that Amunet has some big plans coming up. But she also is a survivalist. So if that gets threatened, you never know.

The Arrowverse has so many awesome female villains in its arsenal. The Flash has Killer Frost and your character, and Arrow has Black Siren, Huntress, and so many others. Would you be interested in doing of a version of the mini crossover in tonight's episode, and sort of have the evil ladies teaming up?

The cool thing about Amunet is, they continue to write her so fun, and the dialogue they give me is so interesting, and then they also give me the freedom to add more interesting touches and dialogue to her as I'm going. So as long as they continue to put her in crazy places, I'll show up. I absolutely love this character. I think she's so much fun.

Interview: Katee Sackhoff On Joining 'The Flash' And What's Next For Amunet Black

Supergirl: Lex Luthor Gets a Rude Awakening in "I Believe In a Thing Called Love" Clip (Exclusive)