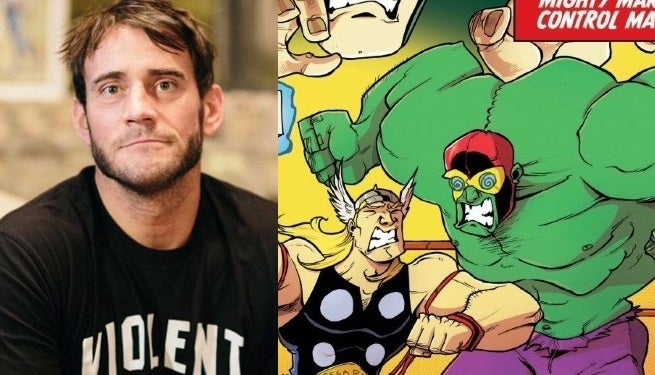 Wrestling and MMA star CM Punk and Chew artist Rob Guillory are making their big, Marvel Comics debuts with a 10-page story in this Wednesday's Thor Annual #1. The story features young Thor during the days when he was still trying to prove himself worth of wielding mighty Mjolnir, and going about it in pretty unusual ways.

ComicBook.com had an opportunity to sit down with Punk and Guillory to talk about their story.

Punk, What was the biggest goal you set for yourself in making your Marvel debut?

PUNK:  Just to write a short, entertaining story people of all ages would enjoy.

What was the collaborative process like, with Punk being a first time comic book writer?

GUILLORY: Our process was pretty natural, really. Punk's script did a great job of fleshing out his distinct take on these characters and giving me a feel for what he was going for, and that's the most important thing. He wrote using Marvel Method, which let me decide how I wanted to pace the story. This method worked best for this sort of story, which was heavy on physical, unspoken comedy. So there was plenty of room for me to flex my storytelling muscles and simply let the characters act out Punk's script. Overall, Punk knew how to play to my strengths as an artist, and that's the sign of a smart writer.

How does your history as a wrestler affect the way you approach fight scenes in comics?

PUNK:  I think I can grasp things from a different perspective.  Like how people view Thor.

After playing a character for so long, how is it to write dialog for a character that you're not also embodying? Do you find yourself trying to inhabit the character in a similar way?

PUNK:  Absolutely!  I can write a lot of dialogue fairly easily.  I think performing for many years helps me see things through different characters eyes.

10-pages obviously isn't a whole lot to work with. How did you approach telling a complete story in such a constrained space?

GUILLORY: Well, our story is a very, VERY dense 10 pages. We crammed in as much nuance as we could into those pages. For my part, since I handled the pacing of each scene, I relied a lot on giving the characters enough room to breathe and act, without the pages feeling too cluttered. And since our story was comedic, timing was everything. I wanted to give each joke enough time to build to a punchline, without feeling rushed. That's tricky in only ten pages, but I think we pulled it off.

What was the most surprising challenge you encountered when writing your Thor story?

PUNK: I'm not sure anything was surprising except for the fact that I had this story in my head and I wouldn't just come out.  I had to force myself to sit and write in order for things to flow.

Rob, you have a very distinct style that comes through even when working on these Marvel characters. How was the process of recreating these character in your own visual style?

GUILLORY: It was a pretty organic fit. My style tends to focus on caricatures and exaggerations, and that's pretty much what superheroes are. Visually, they're not that subtle. Thor is Thor because he's a warrior that loves a good fight, and he has a big friggin' hammer. Volstagg is huge and has a giant beard. They're caricatures by nature, so that's right up my alley.

Your variant cover for the issue is pretty brilliant. Where did the idea come from, and what was the creative process like for that?

GUILLORY: HA. Well, Marvel basically said "Hey, we wanna do a wrestling cover". And as a wrestling fan myself, this was a dream fit for me. So I pitched them four or five different ideas, and the Luchadore Hulk idea was my most insane, longshot idea. The idea basically came from my fanboy desire to draw Hulk vs. Thor. And as a longtime Marvel fan, I just wanted to draw as many Marvel characters as I could get away with. That's really the heart of it.

I literally told my editor Jon Moisan, "I'm 95% sure you won't approve this." And he even agreed that Marvel probably wouldn't go for it, so I sorta pushed the issue politely. I just knew that fans would love it. And much to my surprise, a few days later, Marvel gave me the thumbs up.

With a Thor story under your belt, what other Marvel character would you like a shot at writing? Were there any characters that didn't make it into the story that you'd still like a shot at?

PUNK: All of them is the short answer.  Punisher is number one with a bullet.  I never imagined writing Thor, so I'm very open for any of Marvel's ideas going forward!

GUILLORY: Oh, so SO many. Captain America, Spidey, Miles Morales, Rocket Raccoon, Luke Cage, Iron Fist and about a bajillion more. But I got to draw Luchadore Hulk, so that's a huge consolation prize.