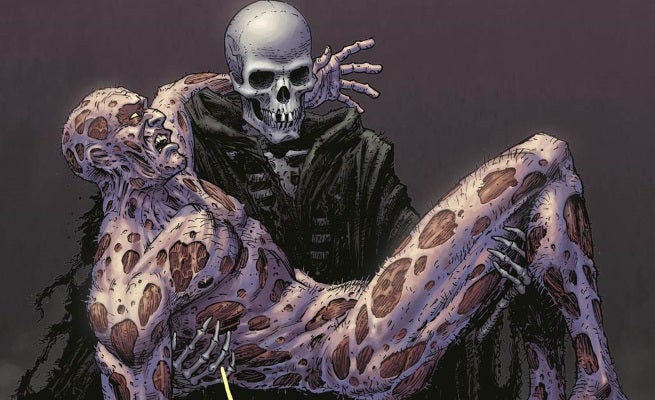 Marvel Comics has provided ComicBook.com with an exclusive first look at Tony Moore's "Death of Deadpool" variant cover for Deadpool #45.

The 250th Deadpool solo series will close out the current ongoing series with an oversized final issue where Wade Wilson dies. The issue will feature short stories of Wade's closest friends and allies from some of the most celebrated creators to ever work on Deadpool, including a story where Deadpool gets the Thanos' Infinity Gauntlet.

Moore's cover is an homage to another to the cover of Death of Wolverine, which the saw the end of another one of Marvel's most popular characters.

Deadpool #45 goes on sale April 8. See the full cover below.

FINAL ISSUE!
That's right-if you add together all the Deadpool series (creatively) issue 45 is the big 250th issue of Deadpool! What better way to celebrate than to end the series? In our over-sized main story, ULTIMATUM comes at Deadpool for revenge, so he has no choice but to take them on-ALL OF THEM. Then, in an Infinity Gauntlet crossover, what would Deadpool do if he got the six gems from Thanos? Plus: a slew of stories showcasing Deadpool's closest friends and allies by special guest writers! Also, SPOILER: Deadpool dies at the end of the issue.
Parental Advisory