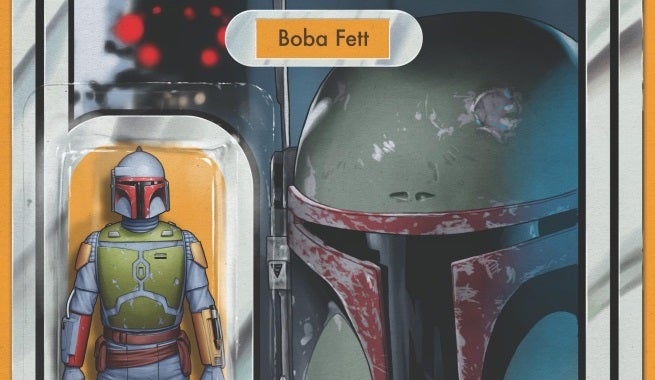 In addition, Christopher, who has been providing action figure variants for Marvel's Star Wars line and will continue with variants for Secret Wars, took some time to talk to us about his work for Marvel.

Be sure to check out the full variant cover, along with some photos of Christopher at home with his impressive collection of action figures, and check out his website to see and purchase more of his work.

Are you a big action figure collector?

I am! I collect a large variety, from classic toys to modern high end stuff; I don't care if it's from comics, movies or video games. I just look for what I think is cool! Figures, as well as art, can be viewed through so many different lenses. Sometimes it's for the detail and craftsmanship, other times it's because it touches my nostalgia nerve. I'm one of those collection people, a Pokemon master. Once I get one, I gotta catch them all!

When you started these, did you ever expect to be doing more and more of them?

I've been so blessed with these, and the fact that people really seem to dig them makes me so happy! I'd been overloaded with work for quite a while, and I remember my wife and I had a talk about how I needed to cut back. I remember I was on another of my 36 hour all-night shifts, and George Beliard called me up about doing some additional work. I was like, "Man, I'm really slammed right now." He assured me it was a project I didn't want to pass up. It involved a little property that MARVEL had just gotten back, something to do with "Star… something."

My immediate response was, "You're going to do a Star Crash book, starring David Hasselhoff! I'm in!"

He then informed me it was for a lesser known property called Star Wars, and I thought that would be cool too ;)

I am so honored to have this opportunity. I felt that if I was in this right place at this right time, no matter what, I had to carpe diem! I can't thank all the people at MARVEL and Lucas enough for this!

It's been such a trip. I grew up with the Star Wars movies and toys. They weren't something I just played with, they were something that helped define my childhood. I grew up on a small farm in the middle of nowhere, so these characters and their plastic avatars were what helped develop my imagination.

Working on these is the closest thing I have to buying a DeLorean! My own personal art director has been my 5-year old self. Whenever I work on these, I ask him what he thinks. He always thought it was funny that the Luke figure had this neon yellow hair, or that Vader had this rockin' vest/cape, so they had to be included!

So, long story long, I've really just enjoyed the ride. I've had so much fun working on all the action figures, and I'd be happy (and honored) to do them for the rest of my life!

Which one has been your favorite so far?

That's so TOUGH!!! I've always related to Luke; growing up on a small farm, being a day-dreamer. But I think if I had to choose, I would say Boba Fett.

It might sound cliche, but he was someone 5-year old John thought was AMAZING!!! He was such a blank slate when the toy came out, and he looked so cool! I had a ton of rad adventures with him. He was the guy I had flying around my parents woods, so to be fortunate enough to be able to draw him was super surreal!

Now if there is one other character I would like to do, that would be the Rancor! I always thought he was too cool! I remember when I was a kid, I saw Thriller for the first time. It scared the CRAP out of me. In my wisdom, I figured the only thing that could stop a dancing, zombie, werewolf/cat Michael Jackson was a Rancor. So I slept with him as my teddy bear for the better part of a year. If I ever get the opportunity to do a cover with him, I would love to put some type of a shout-out to that part of my childhood.

I know with the Secret Wars covers, you've been including some accessories, might we see some more as you continue to do them?

This whole series has just been F.U.N.! I had a lot of concern about how close I should keep these to the original look and feel of the toys. Some of my early sketches had them much more inline with the more traditional look of the characters. The problem was they just didn't feel right. There is an awesome level of 80's insanity to this line, so I've really tried to play that up. My art brain was screaming about how short the legs were, or how crazy the shoulder to head ratio was; but I realized that's what gave them their charm. Now, I've come to love Beefcake Spider-man (I'd love to work on an alternate universe series, where everything is the exact same, except everyone is jacked to the gills… oh, and Captain America's dad threw acid in Red Skull's face creating Red Skulletor [Earth 85-13114])!

When the chance came to start creating versions of modern characters, I felt I needed to keep that philosophy in mind.

All the lines of action figures have the principle that the original toy line is the foundation, but I wanted to push that further with how they might look with the sculpting and reproduction limitations of the era removed. I wanted to make the stretchy parts of Mr. Fantastic something that could be done during the time, but also to add elements like seams and detail into his beard that they wouldn't have been able to do.

Continuing with this idea, I ask myself what type of accessories would fit this character. I loved the idea of Deadpool coming with a TON of weapons, and chimichangas of righteous fury, while Cyclops would just roll with his optic blast. There are some future ones I have lined up that I think could be really fun to go bananas on!