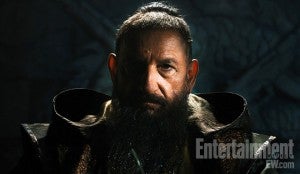 Ben Kingsley's first full appearance as Iron Man 3's film version of The Mandarin has been revealed by Entertainment Weekly, in a still photo that seems likely to be a screen grab from the trailer coming tomorrow for the anticipated Marvel sequel. While fans at Comic-Con had an opportunity to see the character--who in the comics is powered by ten rings powerful rings he uncovered on a crashed alien ship. Fans had speculated that, while the early Iron Man movies relied on fairly real-world scenarios, the introduction of magic and aliens in Thor and The Avengers opened the door to a more traditional interpretation of The Mandarin. Whether that's true or not remains to be seen--in the teaser footage, he was seen cocking a gun, which seems like an unnecessary precaution if you've got those rings. While "The Ten Rings" terrorist organization has been referenced in the first two Iron Man films, Iron Man 3 will be the fist appearance of The Mandarin, and the first time he's been directly referenced. "A lot of this movie is about characters going back into the shadows for various reasons and characters who have been in the shadows coming out and into the light for the first time," Marvel's Kevin Feige told the magazine. "It is Tony who, for various reasons, finds himself receding into the darkness. I don't mean emotional darkness, I mean literally ducking out of the spotlight. And we'll see other characters stepping up who have pulled strings from the background, starting to show their hand."

Iron Man 3: THIS is the Mandarin