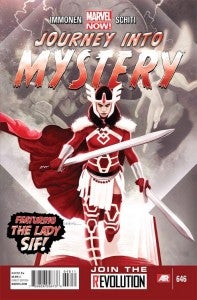 , the title that first introduced Thor to the Marvel Universe, has been widely speculated as ending in the next few months. But earlier today at a Marvel Next Big Thing liveblog, the publisher announced that the title will continue, being taken over by writer Kathryn Immonen and artist Valerio Schiti with November's #646. "Kathryn was at the top of my list as far as character as well as keeping things interesting and quirky," Marvel Associate Editor Lauren Sankovitch said of the writer, who will reportedly shift the focus of the series to Lady Sif with her introduction to the series, which will continue its original numbering and not carry the Marvel NOW! banner (much like the teased Avengers title by Kelly Sue DeConnick). We talked at length as far as what her story could be, and it came down to a single question: What does she want? For Sif, what she wants above all is to be a better warrior. How far would she go for that? She makes some terrible decisions and puts a lot of people in peril," Immonen explained. "One of the really interesting things about Sif to me is that she's defined by absence, with her lover, Thor, and brother, Heimdall, always away from her." Immonen also said that while familiar faces will show up in the title, they won't be any that the fans will expect. "What's most interesting to me about the Asgardians is the inevitability of them," the writer said. "So much of their conflict is internalized because they don't have alter egos. They're also almost more human because of that."