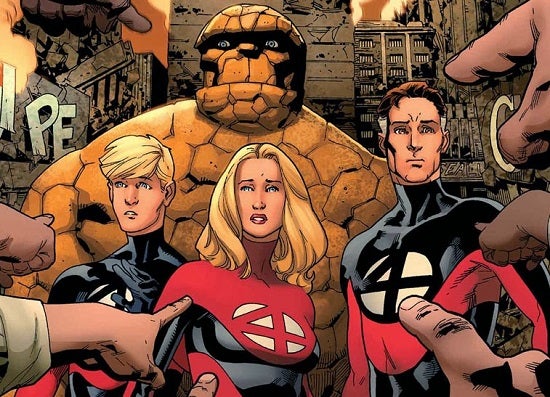 As mentioned in my review of James Robinson and Leonard Kirk's fifth issue of Fantastic Four, they and their guest artists made a ton of references to past issues, artwork and continuity of The World's Greatest Comic Magazine. Being a longtime fan and reader, I really appreciate this sort of thing. Realizing that a lot of you out there might not have the same depth of knowledge with the series, I figured I'd put together a handy-dandy cheat sheet for you to help you make the most of your reading experience. Without further ado and going in order of the references' appearance in the issue… SPOILERS!!! 1. The Fantastic Four's Relocation to Manhattan A little known fact about the Fantastic Four is that they weren't always located in New York City. That's right, for the first two issues of the series they lived in Central City, California. This fact is referenced when prosecutor Aiden Toliver initially questions Reed Richards about the team's first public action. Coincidentally, Central City is a fictional city existing in the Marvel Universe. Also coincidentally, while the third issue of the series does not explicitly state that the action is now taking place in New York, the fact that the team is residing in what appears to be the Baxter Building confirms this fact. 2. Direct Artwork References to The Fantastic Four #1 In Chris Samnee and Matt Wilson's flashback artwork, they make very explicit reference to panels from the Fantastic Four's very first issue. First we get Reed Richards immediately after firing the "4" flare that brings the team together to "look at pictures" as Toliver references: 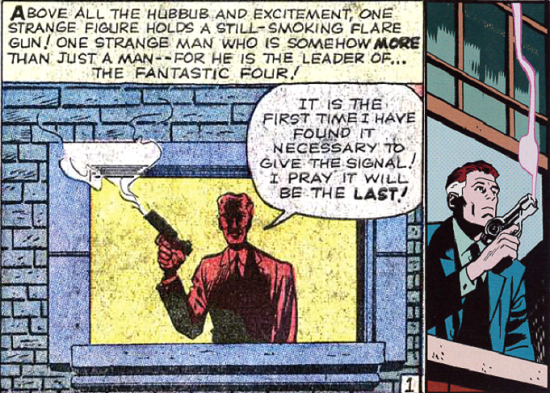 On the left is Jack Kirby's original artwork showing Reed standing in a window holding a smoking flare gun. While the angle is different, Samnee's art of the right is essentially the same scene with a similarly shaped gun and Reed wearing what appears to be the same style of suit. Oddly enough, Toliver's criticism of Reed for shooting a flare gun simply to contact his teammates for what is realistically not an immediately urgent matter and the resulting chaos that results from the rest of the team making their way to his location are things that folks examining this issue in a modern context tend to poke fun at.

Here you'll notice that Samnee and Wilson have once again recreated an original Kirby-drawn panel albeit from a different angle. Susan is wearing essentially the same outfit and in both pictures is knocking over someone carrying a stack of packages. Of course, when Kirby originally drew this, people didn't carry around Starbucks so that's an addition on Samnee's part. 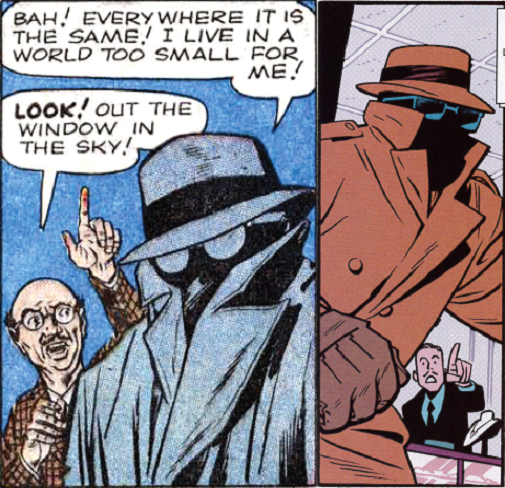 Here's more Kirby to Samnee translation this time with the Thing. Here we see Samnee recreating the Thing's outfit almost exactly and even including the mustachioed shop clerk raising a finger in surprise.

Our final direct visual reference to The Fantastic Four issue is this scene with the Human Torch. The jack Kirby panels on the left are taken out of order but one can see how they are being closely replicated in the panels from Samnee and Wilson on the right. By the way, you'll notice that the caption boxes are empty. That's because I'm trying to show you the art, not spoil the story. At any rate, I really appreciate these very faithful visual recreations. Samnee's art is pretty awesome and it's great to see his reinterpretations of the King's work. 3. Thing vs. Hulk Round Two When Toliver questions Ben Grimm, he makes reference to a fight he had with the Hulk, "not [his] first, but early on." He makes this distinction because the first time the Fantastic Four encountered Marvel's Not-So-Jolly Green Giant was back in 1963's Fantastic Four #12. In this issue there's a tussle with the Hulk but not really a full-on brawl. Plus, it takes place in a desert in the American Southwest as opposed to New York City. Oddly enough, the Hulk wasn't truly the antagonist in this issue. Nope, he was framed by a Commie saboteur. The fight that Toliver is referencing takes place in 1964's Fantastic Four issues 24 and 25. As is noted in the issue, the Avengers are involved and it's actually a pretty awesome little crossover for its time. This brings us to more art references… 4. Direct Artwork References to Fantastic Four #25 The art team of Dean Haspiel and Jim Charalampidis reference and recreate artwork from Jack Kirby that appeared on the cover (Jack Kirby on the left and Haspiel/Charalampidis on the right): 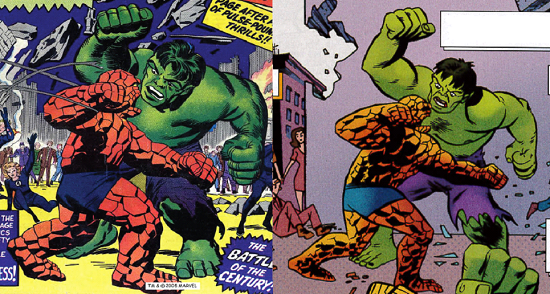 And in the interior:

Obviously, the interior art is interesting because Haspiel has altered the poses of the Thing and Hulk to make their face visible. In terms of pose and layout, I would argue that this is a significant improvement over the original. Also, it's worth noting that Haspiel draws a very nice Thing-face. At any rate, once again it's very nice to see these visual nods to the issue being referenced. 5. The Sub-Mariner, Romance and Rapaciousness There are actually a number of references crammed into one two-page spread depicting an attempt by Namor the Sub-Mariner to invade New York. Prosecutor Aiden Toliver first makes reference to a possible romance between Susan Richards and Namor. There has always been an odd relationship between the two of them ever since their first meeting in 1962's The Fantastic Four #4 when Namor offered to show mercy to the human race if she married him. Perhaps the most sustained exploration of their relationship occurred during the period in the 1990s when Reed Richards was thought to be dead. 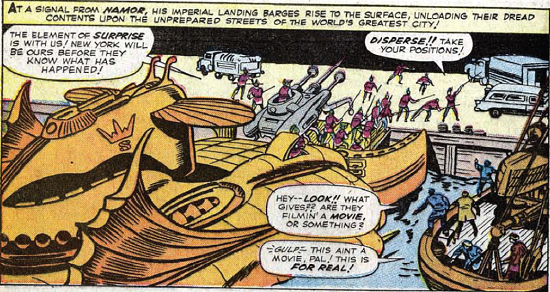 As far as Namor's attempted invasion of Manhattan, the flashback artwork does not appear to be drawing from a specific source. However, based on the nature of Toliver's comments, I'm guessing that he's referring to Namor's first attempt at armed invasion back in 1963's Fantastic Four Annual #1. Finally, Toliver makes reference to the African nation of Wakanda and the fact that they would wish the Fantastic Four had handed Namor over to the proper authorities. This is a reference to 2012's event comic miniseries Avengers vs. X-Men in which Namor, powered by the Phoenix Force, flooded Wakanda in a fit of rage. The Wakandans did not take kindly to this. 6. The Inhumans, Their New York Rampage, and the Destruction of Attilan 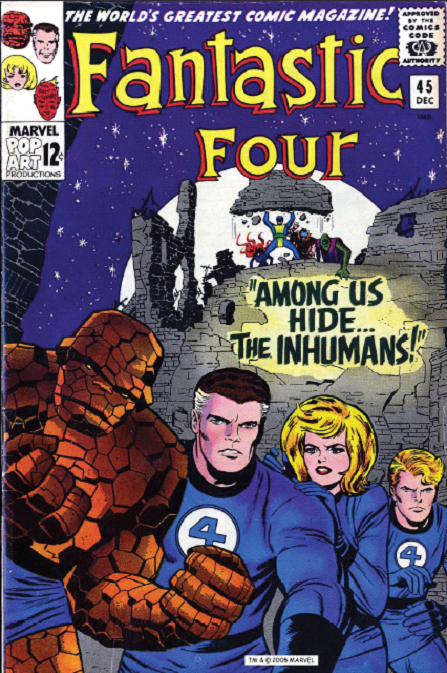 The Inhumans are too complicated to go into in full detail. Suffice it to say that they are a humanoid race residing on Earth that gains superhuman powers through contact with something called the Terrigen Mists in a process called Terrigenesis. The first Inhuman to appear was Medusa who showed up as a member of the Frightful Four in 1965's Fantastic Four #36. However, their first proper appearance was 1965's issues 44 and 45, wherein the mass destruction referenced by Toliver occurs. Also referenced is the destruction of their floating city Attilan when it crashed into New York City in the fairly recent Infinity #3. This has had fairly extensive repercussions for the Marvel Universe to many and varied to go into here. In a nutshell, some Inhumans mated with humans and now Inhuman hybrids are mixed in with the human population unbeknownst to themselves. When Attilan crashed a Terrigen Bomb went off which released Terrigen Mists around the globe and "activated" these secret Inhumans. 7. Doom vs. the Fantastic Four The art team of Chris Samnee and Matt Wilson is back with scenes of the Fantastic Four taking on Doctor Doom. The first image is a direct reference to the cover of 1965's Fantastic Four #39 by Jack Kirby which featured Daredevil:

It's quite a nice rendition to be honest. The poses are energetic and the angle is very dynamic. I'm not entirely thrilled with the way Ben Grimm's face is rendered but that's rather beside the point. Just as a point of interest, this issue features Daredevil helping a powerless Fantastic Four survive attacks by Doctor Doom. The subsequent images depict Doom with the powers of the Silver Surfer, a Doom mask flying through the air, and Doom wearing leather armor and holding Reed and Susan's daughter Valeria. The first is a reference to Fantastic Four #57 (1966) through 60 (1967) where the team has to fight a Doom who has stolen the Power Cosmic from the Surfer. The next is very likely a reference to 1984's issue 268 where the team is attacked by a floating, seemingly autonomous Doom mask that they had lying around after Doom's apparent death at the hands of Terrax the Terrible, former herald of Galactus, in issue 260. The final image is a reference to 2003's "Unthinkable" arc, issues 497 to 500 by writer Mark Waid and artist Mike Wieringo. In this arc, Doom gained a magical suit of leather armor made from the skin of his former love and used Valeria as his "familiar" to attack the Fantastic Four. Franklin Richards was sent to hell and Reed was taunted by Doom for his inability to master magic. 8. First Appearance of Galactus and the Ultimate Nullifier Prosecutor Toliver eventually questions Reed Richards about the first coming of Galactus and the Ultimate Nullifier. This occurred in 1966's Galactus Trilogy (Fantastic Four #48 - 50). While Toliver doesn't take Reed to task for saving the world, he does question Reed's seemingly lackadaisical handling of the Ultimate Nullifier, letting it come into his possession and then "misplacing" it time and time again. Oddly, Reed doesn't retort that he initially gave it to Galactus at the direction of the Watcher, but that's beside the point. We're treated to a beautiful page from Mike and Laura Allred and that makes everything okay. 9. Malice and Direct Artwork References In my review, I mentioned that I hate Malice with a passion. Still, Jerry Ordway and Jim Charalampidis do an excellent job of recreating specific panels from 1985's issues 280 and 281 of Fantastic Four by John Byrne. You can see the panels below, the Byrne originals to the left or above and the Ordway reinterpretations to the right or below:

While I can't find a specific source for Toliver's witness who claims that Ben Grimm threw a car at his dad's taxis, here's a selection of Ben's car-related destruction: The Fantastic Four #4: 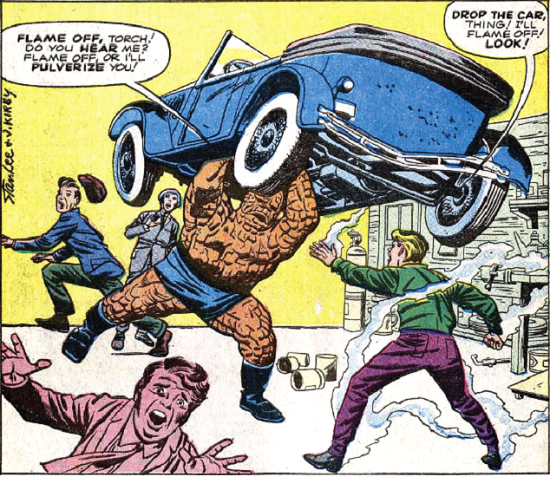 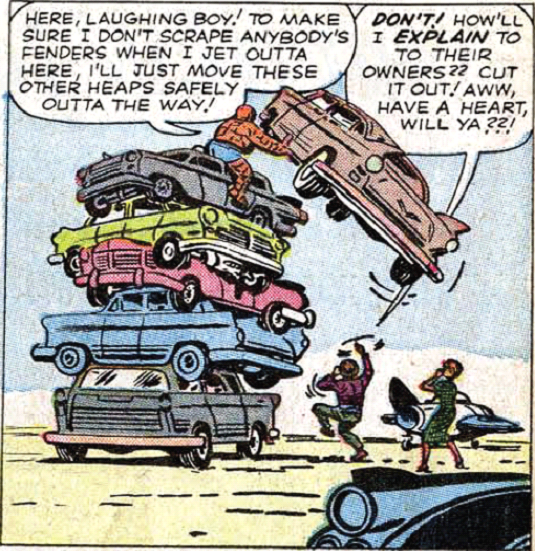 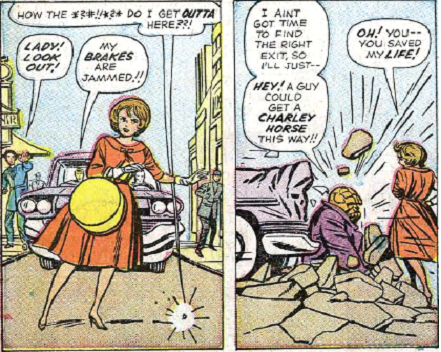 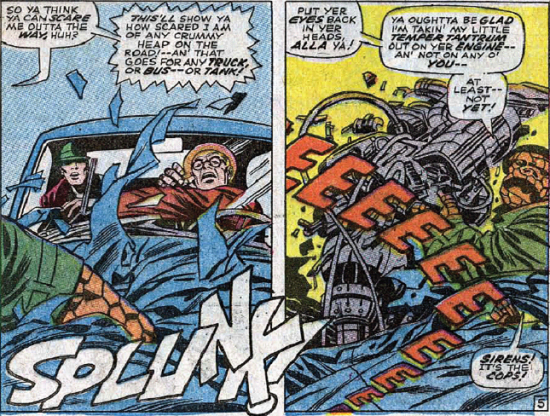 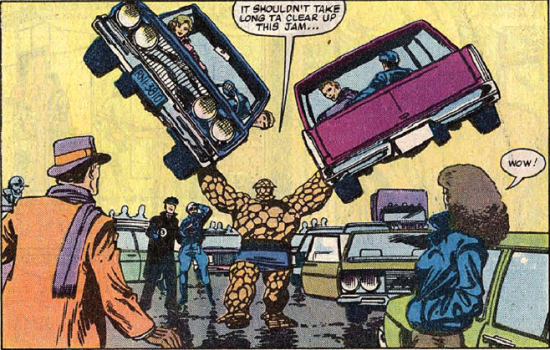 The last page of this issue reveals that the Future Foundation kids will be under the care of Jim Hammond. Hammond is an android created by Professor Phineas T. Horton in 1939's Marvel Comics #1. Hammond fought against the axis powers during World War II alongside Namor, Captain America, and his sidekick Toro. Following the war, Hammond disappeared under complicated circumstances. Perhaps his first postwar appearance might be 1966's Fantastic Four Annual #4. Personally, I can't wait to see the part he'll play in this series. 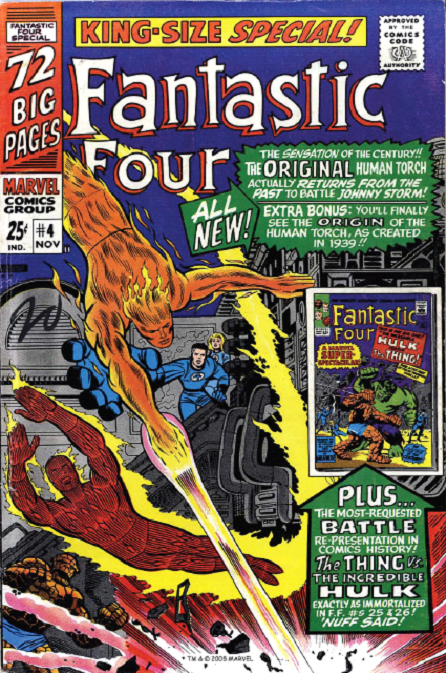 So, whatcha think, folks?  Did I miss anything?