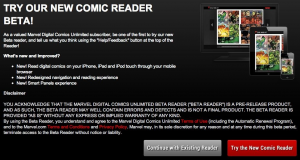 Digital Comics Unlimited, the unfortunately-acronymed program that allows Marvel Comics fans unlimited, cloud-based access to thousands of comics from throughout the company's publishing history, is coming to iOS, with iPhone and iPad apps currently in beta testing. Marvel's unlimited program, in which you pay a flat rate for yearly access and essentially rent their library at your leisure, sometimes seems to update haphazardly and hasn't had nearly as much recent promotion as the more mainstream push to convince readers to buy digital comics from ComiXology and the Marvel App. The service was the first major push toward digital comics by a mainstream publisher and has been compared to the unlimited "Movie Pass" concept spearheaded by Blockbuster Video at the time. The idea has since been appropriated by nearly every streaming video company on the planet. Many fans have wondered whether the Digital Comics Unlimited program might be on its way out, while others have questioned why the program hasn't been given an app for iOS and Android that would bring it to some of the most popular digital reading devices currently on the market. Since the site has long been flash-based, it wasn't compatible with iOS devices, meaning that while some fans were able to read their unlimited digital comics from certain compatible mobile devices, those with iPhones and iPads were left in the dark. No official statement appears to have been issued by Marvel yet, but if you're a subscriber, log in and there's a good chance you'll get the invitation shown above.