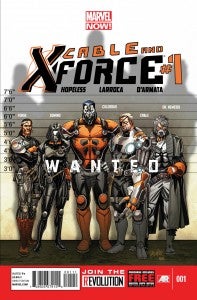 For fans who have been wondering where Colossus might end up following the events of Avengers vs. X-Men, and who had briefly entertained the notion that he might be the series's big fatality since we haven't seen him in any of the Marvel NOW! solicitations, it's time to finally exhale. Colossus--along with Forge, Domino, Cable and Dr. Nemesis--will appear in the upcoming Cable and X-Force series from writer Dennis Hopeless (who's also doing the Avengers Arena title announced yesterday) and Salvador Larroca. "We knew the return of Cable had to be big and this is going to be one of the most explosive Marvel NOW! launches, " said Axel Alonso, Editor in Chief, Marvel Entertainment.  "Dennis and Salvador are bringing a new look and feel to the X-Force, with a story that hearkens back to the core themes that made them such a phenomenon while moving them forward in an exciting way." The team--apparently all wanted criminals--will reconvene in December with Cable back in the lead of X-Force for the first time in quite a while, and he'll still be reeling from AvX, which left him in a coma following his brutal attack on The Avengers. "Not only does every book with the Marvel NOW! logo feature a new superstar creative team and blockbuster story, but they also come with all-new incentives for our retailer partners," explained David Gabriel, Senior Vice-President of Sales, Marvel Entertainment.. "We want to make sure every comic shop nationwide is fully stocked to meet the high demand we're already seeing for Marvel NOW! And want to make sure their voices are heard throughout this exciting time. Stay tuned for more news on how Marvel will be working directly with retailers to make sure our programs address their needs." "The X-Force that Cable's leading is a group of outlaws trying to save the world," said Hopeless in a release from Marvel. "They're fugitives being chased across the globe and doing what good they can while always looking back over their shoulders. There's not much room for error on this team."