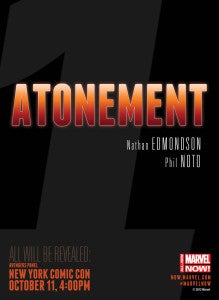 The latest Marvel Comics teaser sees Nathan Edmonson and Phil Noto--two mainstays of the indie comics scene--taking on an Avengers title. The one-word teaser? "Atonement." Set to be announced on October 11 at the Avengers panel, there's nothing much to go on here--although there are plenty of storylines they could be referring to. One of the recurring themes at the Infinity Panel at San Diego Comic Con International this summer was that members of both The Avengers and the X-Men have quite a bit to answer for, and that writer Rick Remender will be forcing them to answer for a lot of it in Uncanny Avengers. "What's happening…is going to be a culmination of all that we have seen in the Marvel Universe leading up to this point with the Avengers and the X-Men. And while the heroes have been dealing with their own issues and their inability to work together, the villains have been planning things," Remender said of the "Ragnarok Now" story in Uncanny Avengers. "And this is going to be a big story that revolves around the Red Skull, the Apocalypse Twins and Kang–it's going to have a wide scope going through time and space and there's going to be a large body count. The heroes are going to start paying for what they've done in losses of life." As with all the rest of Marvel's recent one-word teasers, this one comes with the number one in the background, suggesting for most that these will be totally new launch titles as part of the company's All-New Marvel Now intiative.