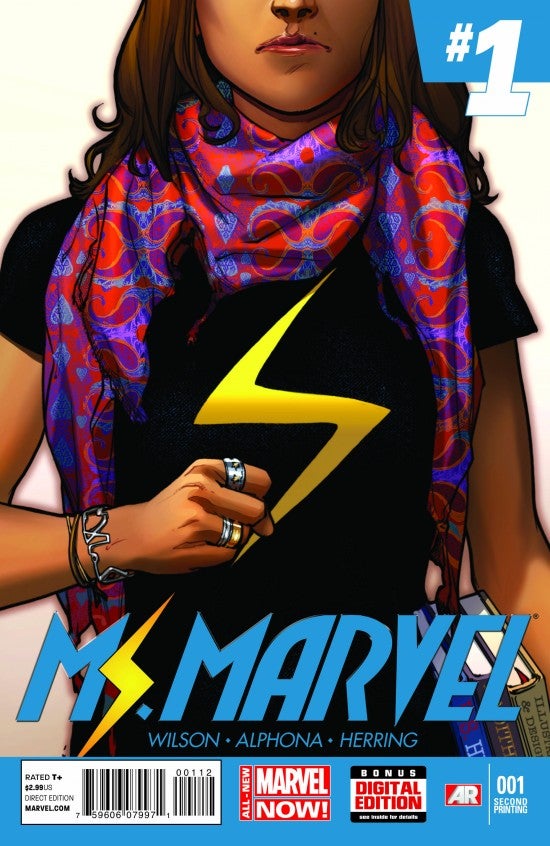 Marvel Comics announced today that the new Ms. Marvel had sold out of its first issue, which was released last week. The comic will head back to presses for a second printing which will be available in March. "Marvel is proud to announce that the first adventure of Marvel's newest leading lady Kamala Khan has sold out at the distributor level (though copies may still be available at retail level) and will immediately head back to press!" The publisher said of the issue, which has had a ton of mainstream media buzz after the publisher chose a young, Muslim girl as its lead. "At her core, Kamala is just a 16-year-old girl, exploring the many facets of her identity when she is suddenly bestowed with super-human powers that send her on the adventure of a lifetime," said Marvel Comics Editor In Chief Axel Alonso. "The inspiration for the new Ms. Marvel series stemmed out of a desire to explore the Muslim-American diaspora from an authentic perspective and yet, this story isn't about what it means to be a Muslim, Pakistani or American," said series editor Sana Amanat. "Those are just cultural touchstones that reflect the ever-changing world we live in today.  This is ultimately a tale about what it means to be young, lost amidst the expectations bestowed upon you, and what happens when you get to choose." "I wanted Ms. Marvel to be true-to-life, something real people could relate to, particularly young women," said series writer G. Willow Wilson. "High school was a very vivid time in my life, so I drew heavily on those experiences–impending adulthood, dealing with school, emotionally charged friendships that are such a huge part of being a teenager. It's for all the geek girls out there, and everybody else who's ever looked at life from the fringe."

Ms. Marvel #1 Sold Out, Going Back For Second Printing