The creator of Thanos is back with a new saga for the Mad Titan that forces the cosmic villain into a team-up with his brother, Starfox.

Marvel Comics has announced Thanos: Infinity Siblings, the first installment of a new trilogy of stories from Thanos's creator Jim Starlin, who teams with legendary artist Alan Davis for a tale that pits Thanos against a mysterious new foe from another era of time.

A brief moment of contentment for Thanos is interrupted when he discovers a temporal anomaly on his home planet of Titan. With the fate of the entire multiverse at stake, Thanos is forced to enlist the aid of not just Starfox, for another major Marvel villain with more experience in temporal warfare, Kang the Conqueror.

Take a look at the first batch of preview pages for Thanos: Infinity Siblings in the attached gallery. 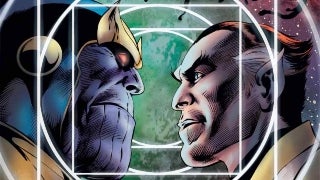 Thanos: Infinity Siblings
Jim Starlin and Alan Davis return in the first volume of a new trilogy! The Mad Titan has everything he ever wanted — but satisfaction is not in Thanos’ vocabulary. When a temporal distortion on Titan draws his attention, he finds the purpose he’s been searching for: saving himself! An old enemy lurks in the far future, and it will take the combined wits of Thanos, his brother Eros and time-travel master Kang the Conqueror to stop it — and save the Multiverse. But there are other players in this cosmic chess game — and Thanos may find himself outmatched! What lies ahead for the so-called Avatar of Death?

Guardians of the Galaxy Director Says Marvel Didn't Ask Him to Include Anything in Vol. 3