For years, Marvel Comics has had its own digital subscription service, Marvel Unlimited.

Over the course of those years, the service has grown to over 19,000 issues strong. While continuing to grow out the catalog of classic Marvel back issues, Marvel Unlimited also adds comics from a recently as six months ago on a weekly basis.

Marvel Unlimited is sometimes referred to a comic book version of Netflix, and the description is pretty apt, or at least it would be if Netflix only featured Marvel and Star Wars content.

With all of those comics in Marvel Unlimited, and more being added each week, it can be a little daunting to find the comics most worth a reader's time.

That's where ComicBook.com comes in. After reading the list of everything coming to Marvel Unlimited in December, ComicBook.com has chosen five must-read comics for the Marvel fan to check out on their tablet or web browser.

Keep reading for the best comics coming to Marvel Unlimited in December 2016.

A spiritual successor to Marvel's original, bestselling Civil War event, Civil War II pits Iron Man against Captain Marvel over the use of a precognitive Inhuman's powers to dish out "predictive justice." Captain Marvel wants to solve perceived problems before they happen, while Iron Man remains wary of how the Inhuman's abilities may be misused or misconstrued.

The series is written by Eisner Award-winning Marvel writer Brian Michael Bendis, but its artist David Marquez who really shines in this series. In the first issue alone, Marquez gets to draw practically every major hero in the Marvel Universe, first for a massive battle scene, and then for a social event, and he does both with equal aplomb.

IT'S HERE! The explosive first chapter in the comic event EVERYONE will be talking about. And we come out swinging with a blistering double-sized first issue from the creative team behind last year's best-selling debut of INVINCIBLE IRON MAN and Miles Morales. A new Inhuman, with the ability to profile the future, emerges and the ramifications ripple into every corner of the Marvel Universe. Lines are drawn, bodies fall, and the Marvel Universe will be rocked to its very core. The action starts here! 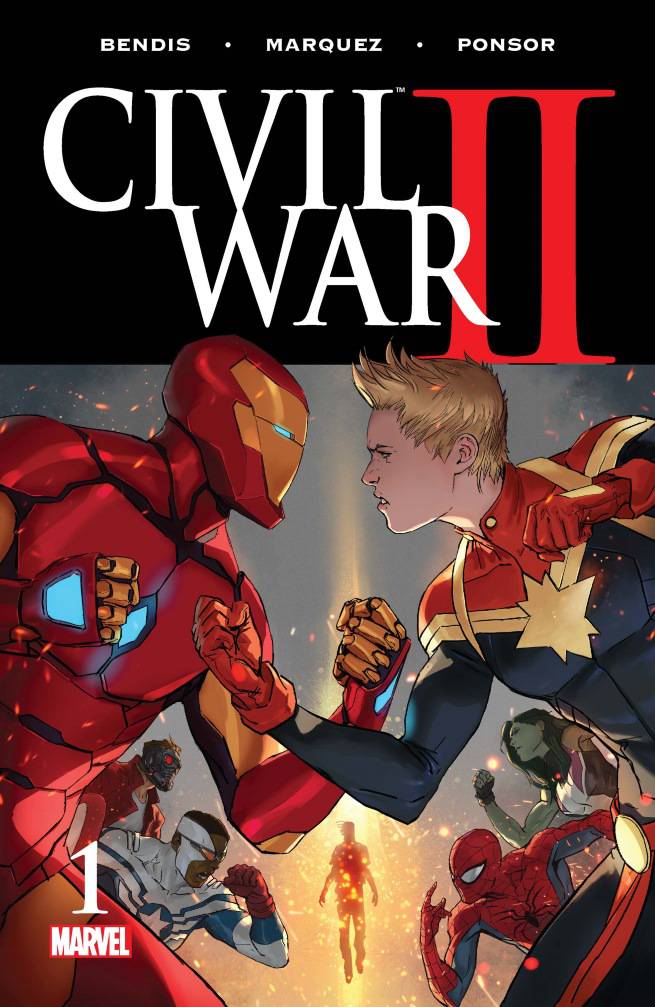 Civil War II: X-Men is officially a Civil War II tie-in, obviously, and rightfully so as it deals with the X-Men's reaction to learning about the Inhuman Ulysses' precognitive powers.

However, the series - written by Cullen Bunn (Uncanny X-Men) and illustrated by Andrea Broccardo - also serves as a second chapter to what is becoming a kind of Inhumans/X-Men trilogy that also include the recently concluded Death of X and the upcoming Inhumans vs. X-Men.

That means, in addition to deepening a readers involvement in Civil War II, Civil War II: X-Men will also help set the tone for the next big Marvel event, IvX, and the ResurrXion that follows.

For more on the X-Men's ResurrXion, check out our interview with Marvel Editor Daniel Ketchum.

Terrigen Mists circle the globe, igniting the Inhuman race while crippling mutantkind, pitting the two nations against one another. But when a new Inhuman with the ability to profile the future emerges, the X-Men fear that he may tip the scales in the Inhumans' favor, spelling doom for their kind. And one mutant is willing to wage war with the Inhumans AND his own people to prevent that from coming to pass… The X-Men enter the fray of CIVIL WAR II when the world's most terrifying mutant, MAGNETO, takes mutantkind's fate into his own hands!

One of the coolest features of Marvel Unlimited is that, in addition to the expansive catalog of Marvel Universe titles, it also includes Star Wars comics, both of the modern Marvel canon and the old Expanded Universe "Legends" line.

Set between the events of Star Wars Episode IV: A New Hope and Star Wars Episode V: The Empire Strikes Back, Han Solo sees Han going back to what he does best: piloting the Millenium Falcon. This time, he's doing it for more altruistic reasons, though, as he enters a highly-dangerous space race as part of a secret mission for the Rebel Alliance.

Everyone's favorite scoundrel gets his very own series! Han is given a top-secret undercover mission for the Rebellion — rescuing a number of informants and spies. His cover for the assignment? Only the biggest and most infamous starship race in the galaxy! You know — the race Han has dreamt of winning his entire life. Will he keep his mind on the mission? And can he manage to pull it off while keeping the lead? Best-selling author Marjorie Liu (X-MEN) comes to the Galaxy Far, Far Away along with superstar cover artist Mark Brooks (ULTIMATE X-MEN) in his return to interior art! Face it, readers — there aren't enough scoundrels in your life!

There are a lot of Civil War II tie-ins, but the anthology miniseries Civil War II: Choosing Sides has consistently been the best.

The one exception is Declan Shalvey's Nick Fury story. In the acclaimed Moon Knight artist's first major writing work he takes Nick Fury off the grid to fight a threat from within SHIELD, giving him a new costume with new built-in powers to boot. This story continues throughout every issue of Civil War II: Choosing Sides.

If you knew something bad was about to happen, would you stop it? How far would you go? The line is drawn. Everyone in the Marvel Universe has to ask themselves: are you with Captain Marvel or Iron Man? Kicking off an all-new series, this first issue features Nick Fury, Damage Control and Night Thrasher! 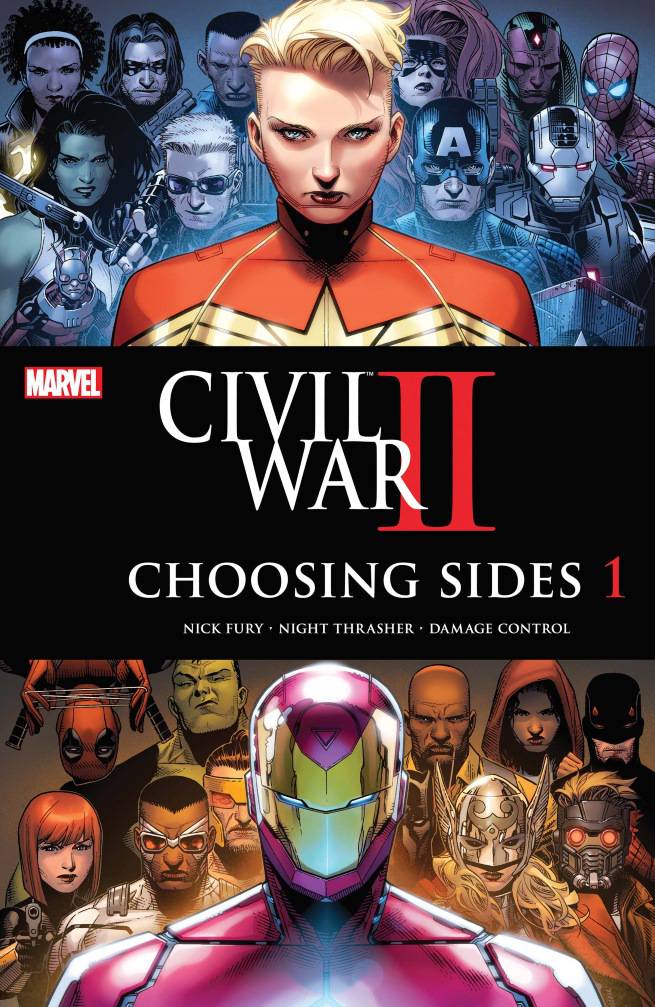 Deadpool V Gambit dives into Deadpool and Gambit's history as con men and grifters who would occasionally work together. Naturally, things never went quite according to plan when the Cajun charmer and the Merc with a Mouth teamed up, and that's where the fun comes in.

The entire series features some surprising guest appearances from the Marvel Universe and is a lot of fun to read. Check out a preview of Deadpool V Gambit #1 here.

Gambit—one of the smoothest, best-looking operators in the world of the X-Men. Deadpool—one of the most annoying, ugliest dirtbags in the world of everything. Naturally, these guys got beef. But do you know what they have in common? A secret history of working together to pull con-jobs. That's right—the grift is on as the Regeneratin' Degenerate and the Ragin' Cajun begrudgingly take on one last job together. Writers Ben Acker & Ben Blacker (THUNDERBOLTS, The Thrilling Adventure Hour) and artist Danilo Beyruth (GWENPOOL) lead us into the dirty underbelly of Deadpool and the squeaky-clean abs of Gambit!

The Best Comics Coming To Marvel Unlimited In December 2016

What's the Guardians of the Galaxy Vol. 3 Trailer Song?