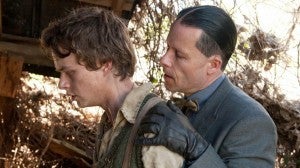 During an interview with Crave Online yesterday, Lawless and Chronicle star Dane DeHaan was asked about rumors that he might be testing for Harry Osborn, Peter Parker's best-friend-turned-arch-nemesis in The Amazing Spider-Man 2. The answer he gave to a fairly straightforward question was nominally geared at avoiding the spread of rumors...but it certainly raises some flags. Observe:

There's big news for you right now that you're in the running for the role of Harry Osborn in The Amazing Spider-Man 2. How far along are those talks? You know, I would love to be in Spider-Man. I have a lot of respect for Andrew Garfield as a person and an artist and a lot of respect for Marc Webb as a person and an artist. If that opportunity were to come along, I would be really flattered and humbled to be a part of it. But that's about it for now I guess. Have you auditioned for it? Well, I know there's a lot of names being tossed around and rumors and stuff, but again, it's a project I would love to do and if the opportunity would come along and the offer would come along, I would love to do it. Until then, I don't think it's worth speculating or creating rumors.

"Have you auditioned for it?" Seems a fairly yes/no question, doesn't it? Instead, DeHaan sidesteps the direct question, essentially to say "a lot of names" are being "tossed around." Sounds a bit like someone who's already read for the part, or is planning to, or is talking to the studio about it, and who doesn't want to throw a negative light on the proceedings (or anyone else who might get the job over him) by talking about it. What do you think?

Amazing Spider-Man 2: Is This Harry Osborn?