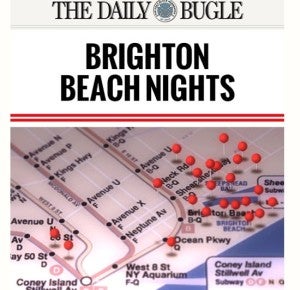 The Amazing Spider-Man 2 viral website for The Daily Bugle Tumblr has posted a brand new article, which teases Russian mob activity. The Russian mob activity is a tie-in to Paul Giamatti's Aleksei Sytsevich, who becomes The Rhino. The article is titled "Brighton Beach Nights," and it is written by Frederick Foswell. Here's the full article. "With reports of Russian mob activity at an all-time high in the city, many have wondered who these (mostly) men are and what they are trying to accomplish. New Yorkers are no strangers to organized crime, but this time it seems different. Gregarious, boastful men fill the Brighton beach night scene — every single one of them with a spectacular guttural baritone voice that makes one wonder if there are any gangster tenors. Mob activity is the suspected cause of a spike in crime across all five boroughs. Not content with hijacking retails goods, sports betting, or drugs, more crime families have become involved in high-tech crimes such as the theft of microchips, processors, experimental metal alloys, and advanced weaponry. Fancy Dan Brito said during his arraignment for the recent Brighton Beach shootout, 'Everything has a price. Including the head of so-called superheroes'" The Amazing Spider-Man 2 is scheduled to be released in movie theaters on May 2, 2014.