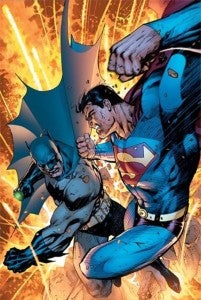 While the official press release from Warner Bros. refers to the movie announced by Man Of Steel director Zack Snyder at the Warner Bros. Comic-Con panel as the "Next DC Super Hero Movie," it turns out the title of the movie has already been revealed. During the Superman 75th Anniversary panel at San Diego Comic-Con, Man Of Steel writer David S. Goyer actually revealed that the title of the new Superman movie would be one of two names, but his revelation seems to have gone unnoticed by most. The Superman 75th Anniversary panel was running at the same time as the 20th Century Fox panel, so Fox's big movie presentations might have drawn attention away from the Superman 75th Anniversary panel. During the Superman 75th Anniversary panel, Man Of Steel writer David S. Goyer said, "So over in Hall H at the Warner Bros.--I guess most people know now--at the end of the Warner Bros. panel, Zack came out and he brought Harry Lennix, who plays General Swanwick in Man of Steel and we--actually, Harry read a bit from [The Dark Knight Returns] and so the next film we're making, we're already in pre-production, comes out in summer of 2015 and it's--we're actually not sure whether the title is Superman vs. Batman or Batman vs. Superman but yes, it's--that rematch, that combination, the two guys onscreen and that's happening." David S. Goyer only gave two examples of what the title could be, so we did a little research, figuring that Warner Bros. would likely have registered the domain name that they would want to use for the title. It turns out that Warner Bros. owns both SupermanVsBatman.com and BatmanVsSuperman.com, which could be used to protect comic book titles as well as movie titles. However, when we added movie to the end, we found out that Warner Bros. had only registered BatmanVsSupermanMovie.com but not SupermanVsBatmanMovie.com. We also checked a couple more possibilities just to be on the safe side, and Warner Bros also hadn't bothered to register SupermanAndBatmanMovie.com or BatmanAndSupermanMovie.com. Someone had registered the domain name WorldsFinestMovie.com after the announcement was made, but it was a private registration, which likely isn't Warner Bros. Warner Bros. would likely have registered that name before they announced it if they planned to use it. Of course, Warner Bros. will likely use the shorter version of the name for their official movie website, but it's very telling that out of all the most likely combinations with movie in the name, BatmanVsSupermanMovie.com is the only one Warner Bros. seems to own, which matches with one of the two titles that David S. Goyer narrowed it down to.

Batman & Superman Movie Title Revealed To Be Batman Vs. Superman