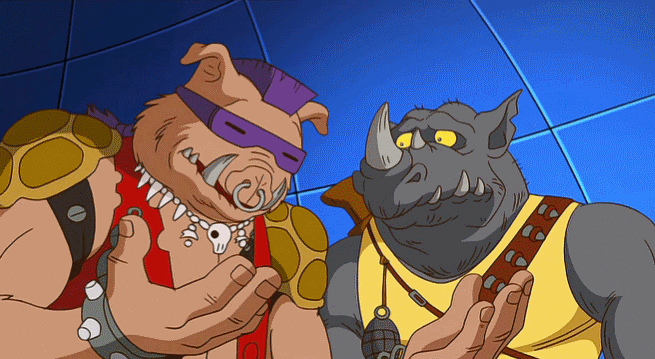 At Paramount's Cinemacon presentation, the studio showed renderings of the characters as they appear in the film's current stage of development, likely the same rendering that leaked to the public weeks ago before being squashed by Paramount.

Bebop and Rocksteady were relatively late additions to the Teenage Mutant Ninja Turtles mythos. They did not appear in the original Kevin Eastman and Peter Laird comic book series, but were created for the uber-popular 1990s animated series so that Playmates would have more mutants to make action figures out of.

Given the cartoon's popularity, it became the definitive take on the turtles for many who grew up during that era, making Bebop and Rocksteady an important part of the franchise. As a result, many of those fans have found it baffling that Shredder's boneheaded mutant thugs have never made it onto the big screen for any of the Turtles' live action outings.

Bebop and Rocksteady were recently reintroduced in IDW Publishing's ongoing Teenage Mutant Ninja Turltes comic book series, which rebooted the series to include elements of continuity from each of the Turtles' many incarnations. They recently made headlines for killing Donatello, in an effort to prove their worth to Shredder.