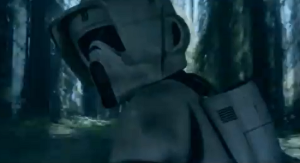 This is, obviously, not official, although we kind of wish it were. This is a fan video that mashes up elements of the Star Wars films with those from Captain America, a Marvel hero now owned by Lucasfilm/Star Wars owners Disney. The first Captain America film, from which this footage is largely drawn, was directed by Joe Johnston, though, who is a friend and student of George Lucas and who did some work on the original Star Wars trilogy. So if this fits together a little too nicely, blame him! Check it out below, along with the uploader's official YouTube description.

Fun little edit I made of Capt fighting off some troopers. Footage from "The First Avenger: Captain America" and "Star Wars: Return of the Jedi". Made for fun, nothing more nothing less.