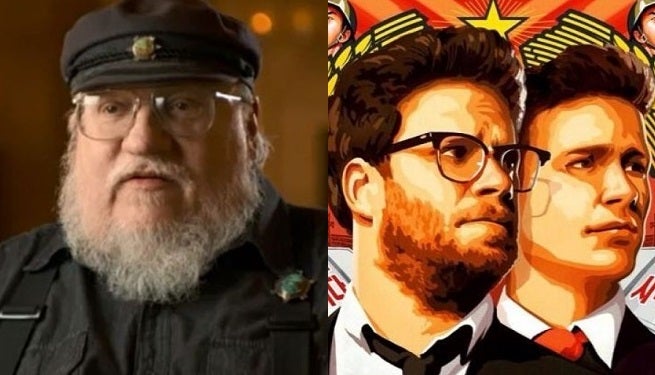 One his LiveJournal blog, George R.R. Martin has expressed his disapproval over what he refers to as "corporate cowardice" in Sony's decision not to release The Interview in theaters.

Martin makes clear that he hasn't seen the The Interview, and has no idea whether it is hilarious or terrible. He does find it ridiculous that corporations as large as Sony and the major American theater chains would be so intimidated by North Korea.

The level of corporate cowardice here astonishes me.  It's a good thing these guys weren't around when Charlie Chaplin made THE GREAT DICTATOR.  If Kim Jong-Un scares them, Adolf Hitler would have had them s**tting in their smallclothes.

Martin goes a step further, suggesting that small, independent theaters are more than happy to show The Interview. In fact, he invites Seth Rogan to come down to the James Cocteau Cinema in Sante Fe, which Martin owns, so that Martin can show the the film on one of his screens.

For what it's worth, the Jean Cocteau Cinema will be glad to screen THE INTERVIEW (assuming that Sony does eventually release the film for theatrical exhibition, rather than streaming it or dumping it as a direct-to-DVD release), should it be made available to us.  Come to Santa Fe, Seth, we'll show your film for you.

We'll have to wait and see if Rogan takes him up on the offer.

Game Of Thrones Creator George R.R. Martin Offers To Show The Interview In His Theatre