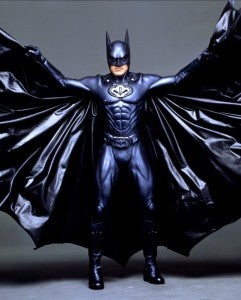 That's not the kind of thing you generally hear on a press tour. George Clooney, in promotion of his upcoming film The Ides of March with Ryan Gosling and Marisa Tomei, did an interview with Total Film where he looked back on arguably the biggest bomb of his blockbuster career: 1997's Batman & Robin, in which he played Batman. "With hindsight it's easy to look back at this and go 'Woah, that was really s**t and I was really bad in it,'" Clooney said of the film, the prospect of which he said had originally really excited him. He went on to say that while it was "a difficult film to be good in," he takes some of the blame for the movie's failure--and it remains probably the biggest break he ever got in his career.