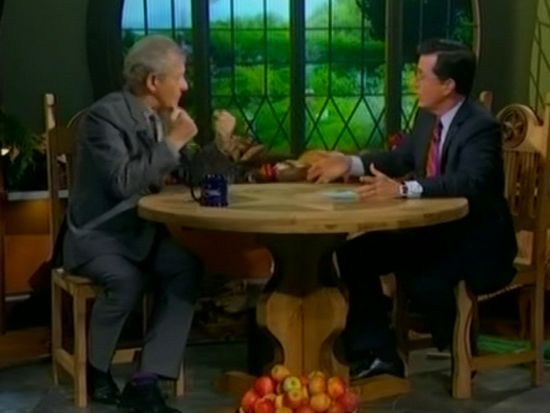 While Ian McKellen has starred in numerous films, he is best known among comic book fans for his role as Gandalf in The Lord of the Rings and The Hobbit movies and for his role as Magneto in the X-Men movies. If you've ever wondered who would win in a fight between Gandalf and Magneto, Mckellen answered the question in an appearance on the Cobert Report. Stephen Colbert asked Ian McKellen if he was ever tempted to use his Magneto power while playing Gandalf to take the swords away from the Orcs. McKellen replied, "No, see, because you know Gandalf is more powerful than Magneto." When Colbert asked to clarify if Gandalf could beat Magneto, McKellen replied, "Yes, every time. The old guy will do it every time. He's seven thousand years old. He knows it all."