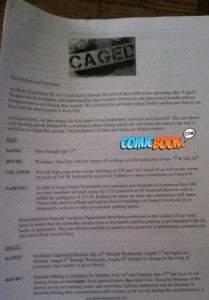 All week Comicbook.com has been bringing you the latest scoop from the set of Iron Man 3 in North Carolina. This past Friday, Iron Man 3 filmed at the New Hanover Regional Medical Center and a local hardware store in Wilmington, North Carolina. While some filming will continue in Wilmington through this week, the Iron Man 3 production will soon be filming in Rose Hill, North Carolina. Over the last couple weeks, Iron Works Productions III, LLC has been building sets in Rose Hill, North Carolina, which include a bar and a diner. Comicbook.com has obtained a production schedule for Iron Man 3 (which is going under the code name Caged). Filming in Rose Hill is scheduled to kick off on Monday, July 16 and continue through August. Most of the production schedule information is typical direction on shooting times, shooting locations, lighting, and parking that you would find in any film production schedule. However, there is a description of shooting activities which provides some interesting information about what some of the scenes in Iron Man 3 will involve. According to the activities section, "Our filming in Rose Hill involves controlled pyrotechnic devices and specials effects which will be cleared by the Rose Hill Fire and Police Departments in advance. They include small explosions, controlled fires, gunfire, atmospheric smoke as well as stunt activity. Although we are filming overnight, the special effects last for several minutes and you will not hear gunfire continuously throughout the evening. We have also requested permission to apply fake snow to our filming area which will be removed upon completion of our filming activities. We will notify the Rose Hill PD immediately prior to the commencement of gunfire."

The shooting description which makes mention of fake snow confirms earlier reports that Iron Man 3 will be set during winter. There have also been a number of Christmas decorations spotted on the sets that are being constructed. While not mentioned in the production schedule, the sets are being built near a water tower, which is rumored to be toppled as part of the production. According to our source, the Iron Man 3 scenes in Rose Hill will include Robert Downey Jr. and will focus on Tony Stark as a lonely hero in a small town setting.