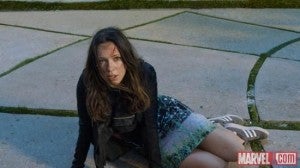 Rebecca Hall, who will appear in May's Iron Man 3 for Marvel Studios, has inked a deal to star as the lead in The Dark Knight Rises cinematographer Wally Pfister's upcoming directorial debut, Transcendence. Hall will reportedly play Johnny Depp's wife in the film--a sci-fi epic that will also star Paul Bettany. Christopher Nolan is among a handful of producers already attached to the movie. Hall also starred in She also starred in Nolan's The Prestige alongside Hugh Jackman, Christian Bale and Michael Caine. Besides The Dark Knight Rises, Pfister has been the cinematographer in films like The Italian Job, Moneyball and Laurel Canyon.