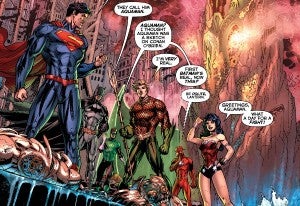 Warner Brothers have apparently begun quietly putting the pieces together to finally make a Justice League movie happen. According to Variety, in the wake of Marvel's success with The Avengers, DC Entertainment and their parent company Warner Brothers have tapped Will Beall--the screenwriter behind the studio's remakes of Lethal Weapon and Logan's Run--to take a pass at the DC Universe's premier super-team. Beall has reportedly not yet turned in his draft of Justice League, which is probably not surprising given the amount of high-profile work on his plate. Logan's Run, in particular, has been singled out recently in a number of articles as a high-priority project for Warner and could be taking a lot of his time getting the final polish done. This isn't the first time recently that a Justice League movie has been put into production by Warner; in 2007, director George Miller was attached to a version of the project that would have recast Batman (Christian Bale was reportedly not interested) and moved forward before allowing Superman or Green Lantern to shoot sequels. The project was ultimately scrapped, and many observers speculated that it may never have been intended to be made, but instead may have been a way to get Bryan Singer to walk away from the Superman franchise. Following the disastrous reception to 2005's Superman Returns, the director was still signed for more DC/Warner work, and if they fired him, reports had it that they would have had to buy out his contract whereas the moment he walked away they got off cheap. Shortly after Miller's Justice League was abandoned, Christopher Nolan and Zack Snyder began negotiations that would ultimately lead to 2013's Man of Steel. The Variety article also cites writers attached to The Flash, Wonder Woman and Lobo, suggesting that those projects--in various stages of development--are still at least theoretically alive. Recent rumors have had The Rock attached to star in Lobo, but Wonder Woman and The Flash have been in development hell for so long that most people had begun to assume they would simply never happen. Two major points are unclear at this stage. First, most fans would probably like to know whether the existing film franchises (Superman and Green Lantern, once The Dark Knight Rises closes out the Batman films) will carry their history and leads over into Justice League, as Marvel did with theirs, or whether Justice League will be a standalone film so that Beall doesn't have to see other scripts. Second, if they are going to carry over histories, will other characters besides Superman and Green Lantern get movies before Justice League? It seems like it would be a difficult sell to get enough balls in the air before the Avengers hype starts to die out.