Even above and beyond the fact that Zack Snyder's upcoming Superman reboot, Man of Steel, will feature Jor-El and Lara more heavily than most comic books in the last 80 years have, or that General Zod and his Kryptonian cohorts are the film's villains (just like in Superman II), there are quite a few visual cues in place in the trailer released this week that suggest, despite all the posturing the contrary, the film won't be tonally all that much different from what's come before it. "The more I watch this Man of Steel trailer, the more it looks very similar to Superman Returns. Grittier, but not tonally different," tweeted Entertainment Weekly's Darren Franich the day the trailer debuted. "I liked Superman Returns. But even I find it weird that, after all the complaints, we're right back to a sad-eyed messiah." He's not wrong; the question, of course, becomes how much of this is reality and how much of it comes out of editing for the trailer that can sometimes make a shot, line or even a scene seem different from the way it will eventually actually play on the big screen. So check these out and, if the trailer got you as excited as it did the rest of us, give ol' Bryan Singer a little break. Space ships on the Kent Farm/Ma Kent hugging Superman I can probably count the number of times I've seen a simple, quiet moment between Clark's parents and Superman in costume in the comic book source material on one hand. Most of the time, if you see them interacting with the Man of Steel, it's because something bad is going down. In both this and Superman Returns, though, we've had versions of "Superman and Martha Kent hugging on the porch" appear in the film. The last time it came on the heels of Superman's return trip to Smallville in his rocket, after having explored the ruins of Krypton. This time it does look as though it's in the aftermath of something ugly, though, although it' shard to say whether that's because of the space ships that serve as prelude to this shot in the trailer, or the tornado we briefly get a glimpse of. Either one could have wrecked the Kent farmhouse.

The Planet in danger No, not "the planet." The Planet. In the trailer, we see Perry White and what appears to be a reporter running from a building that most are assuming is the venerable metropolitan newspaper, under attack. This is one of those things that has become a trope of the Superman on film by this point, with the globe falling twice in a five-year period on Smallville and Superman Returns. (In fact, the Superman Returns version inspired a NSFW video that I couldn't stop laughing at, which is embedded below.)

This movie, being grounded as it is in Nolan-style realism, will likely not even feature a giant revolving globe atop a piece of prime metropolitan real estate, so it's probably not a worry that we'll see the scene replayed beat for beat--but it certainly looks as though the paper...or at least its staff...is in some trouble here. The Lex Mentality Okay, so Lex Luthor may not actually appear in this movie (at least as far as we know--bogus credits, surprise cameos and other such surprises notwithstanding), but it's his mentality that pervades the film. There are elements of humanity who are scared of Superman, or who resent him, for the power he possesses and the perceived threat that he then presents. The other side of that is always Lois Lane, who believes in Superman's inherent goodness and who helps to ground him in humanity. Also - Superman has a bit of this himself. He's always had a bit of alienation, and this movie seems to be playing that up more than ever. 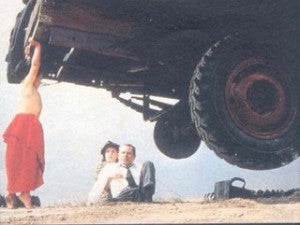 Super Boy One of the most iconic scenes from Richard Donner's Superman: The Movie is the scene in which Clark, a toddler, saves Jonathan Kent when the jack fails while his adoptive father is changing a tire. We see in the Man of Steel trailer that while we probably won't see super-baby anytime soon, certainly he will be getting some of his "powers and abilities far beyond those of mortal man" earlier than he did on Smallville, which jived with what the canon was for the comics at the time it was being printed. Right away in Superman: The Movie, his parents realize that they have to hide the extraordinary abilities from the world until they can figure out what to do about the boy. In the Man of Steel trailer, that same mentality rears its head. Saving cats from trees Okay, so here it isn't cats from trees, but children from what looks like a tornado, or possibly even an attack from above--but the shots of Clark Kent carrying a small child to safety rather than rushing in to stamp out whatever the threat is...that's the same kind of goody two-shoery that seems to really upset DC editorial for some reason.