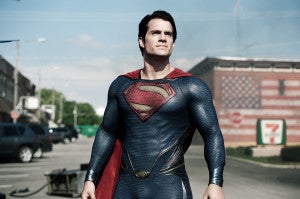 star Henry Cavill might stand to gain a boatload of money from a potential Justice League movie, but he's hedging his bets a little when it comes to discussing the film in public. During an interview on Peter Travers's Popcorn webcast for ABC News, Cavill acknowledged that the power scales of the DC characters being so much higher than many Marvels makes it more difficult to get a handle on a team film, since the stakes have to be so high. In fact, he sounds a bit like he's advocating more of a Marvel approach to the DC Cinematic Universe. "Justice League--more movies, I have no idea," Cavill said. "Justice League could be great if done correctly. It's a very tough one to do because the DC Comics heroes are all godlike in their power so in the real-world setting we're telling our story in it's going to be tough to achieve that and it has to be done very delicately and a lot of thought. So it won't be right away, certainly not, or I hope not anyway. It may take some time building other movies and other characters and then introduce them together in one way or another." He added, "I think it would be great to do but I don't think it's around the corner." You can check out the full, fifteen-minute interview below.