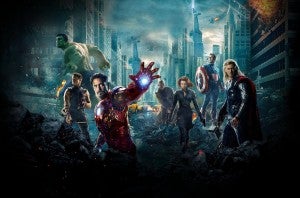 Wow, just wow.  We expected huge things from "The Avengers" and based on Friday's box office take of $80.5 million, we're seeing the beginning of something pretty special.  With great reviews and a stellar cast and director, the film was expected to do well. However, with a non-summer, non-holiday opening, some folks weren't optimistic about just how well the film could do.  After all, a significant portion of the audience (middle and high schoolers) only had so many chances to catch the film on Friday.  So for "The Avengers" to rip off $80.5 million on a school day is pretty darn impressive.  In fact, it's the 2nd biggest opening day EVER for a film.  Only "Harry Potter and the Deathly Hallows, Part 2" ($91.1 million)  fared better.  And guess what?  that film was a summer film.  And the end of a franchise to boot. So what does this mean for "The Avengers" for the rest of the weekend?  BoxOfficeMojo says the film is "practically a mathematical certainty that "The Avengers" winds up setting a new opening record ahead of "Harry Potter and the Deathly Hallows, Part 2"'s $169.2 million." Hey--guess who predicted that to happen? WE did last week, saying $175 million. (gotta toot our own horn sometimes) Let's see how the rest of the weekend goes, but I wouldn't be surprised to see much of a drop today because of the aforementioned reason.  And "The Avengers." like "The Hunger Games," will appeal to much more than the core audience.  Folks didn't believe it with Katniss and company, and they didn't want to believe it with "The Avengers." But this film transcends fanboys.  And the numbers are going to show it.

Official Numbers In: The Avengers Takes in a Whopping $80.5 Million on Friday