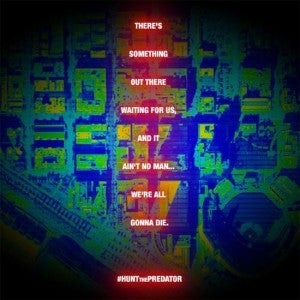 Arnold Schwarzenegger's cult action classic Predator will be released to 3D Blu-Ray in December, and in recognition of the event, the film is coming to Comic-Con. So, no, it looks like there won't be a new Predator film announced. Unless, of course, the focus on the original is to draw attention away from a surprise announcement. In any event, the #HuntThePredator hashtag is meant for fans who want to find The Predator on the show floor and snap a picture with him. Having done so, tweet it with the hashtag and you'll get a pass to the front of the line to have a custom action figure made using a 3-D printer. Here are the details:

In a first-of-its-kind activation at Comic-Con, fans can enter booth #3528 and have their photo taken with state of the art cameras courtesy of 3D Systems. Their image will then be used to make them the victim as a customized figurine is created using 3D Systems 3D printing technology that features the Predator alien holding the fans' severed head! The figurine is only available to fans that purchase the PREDATOR Blu-ray 3D, available exclusively for pre-order at Comic-Con and packaged in a limited edition Predator head for $129.99. Fans can also receive the figurine with the purchase of a "headless" Blu-ray 3D for $49.99. Additionally fans will get a first look at the all-new 3D transfer of the film before it arrives on Blu-ray 3D later this year as they enter the jungle that is ruled by the ultimate warrior that came from another planet.