The story below contains spoilers for The Dark Knight Rises.

In the wake of a rather surprising level of attention given this weekend to the claim that Tom Waits may have inspired Heath Ledger's performance as The Joker in Christopher Nolan's The Dark Knight, we got to thinking about some of the characters in this month's new release, Nolan's finale The Dark Knight Rises. Superhero storytelling traditionally (and one might argue necessarily) traffics in larger-than-life personalities and iconic imagery. It's coded into the DNA, going back to, "It's a bird! It's a plane!...". Sometimes, though, you're almost jarred out of your seat, thinking, "Wow, that character is so similar to this other specific guy that it's a meme in the making!" A couple of those occurred to us while watching The Dark Knight Rises last week, so it seemed like a fun thing to share with you folks. 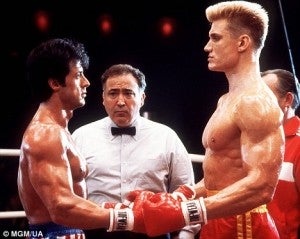 Ivan Drago as BaneAs far back as May, people were suggesting similarities between the apparent plot of The Dark Knight Rises and that of Rocky III, in which the legendary southpaw, coddled by wealth and a series of easy title defenses against guys who had no business in the ring with him, is humiliated by a cruel and brutal young fighter named Clubber Lang. Rocky had to bounce back to defend his dignity and [spoiler alert] defeat Lang to avenge the loss of his father figure, who had tried to prevent him going through with the fight on the grounds that he couldn't win. In June, Hollywood.com ran a full essay on the idea, which was pretty compelling--and in hindsight even moreso. Here, though, we'll just focus on the similarities between Bane and another Rocky villain--the foreign powerhouse with a funny accent known as Ivan Drago. Played by Dolph Lundgren in Rocky IV, the character memorably told Rocky, "I will break you." Sound familiar?

Dr. Gregory House as Bane's Prison Doctor So--a doctor with a drug addiction, who allows it to get in the way of his work and ends up thrown into a deep, dark hole. Sound like anyone we know? Hugh Laurie's iconic TV doc Gregory House may never allowed his problems to toy with a patient's life or physical well-being, but for some reason, all we could think of when Bane's doctor was sitting there, telling us his sad story, was that it would have been hilarious to see Laurie in the role. No reference to anything, just kind of have him there, let it float right by. Of course, given how the House finale and The Dark Knight Rises panned out, there's probably an argument to be made that he's more like Batman...! 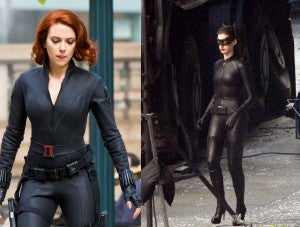 The Black Widow as Catwoman Let's face it--as the girls driving big, male-dominated action-driven superhero movies this summer, it was more or less inevitable that Anne Hathaway's Selina Kyle would be compared to Scarlett Johansson's Black Widow a few hundred times. We never really bought the comparison--and still don't--but if you had to cast a fictional character in Hathaway's role, you could do worse than Natasha. After all, few other characters have the combination of skill, sex appeal and sheer badassery needed to pull off the whole "breaking the guy's wrist without breaking your gait" thing that Selina did at Blackgate. And it struck us as very reminiscent of Nathsha's dealings with those gunrunners in The Avengers.

Princess Aura as Talia al Ghul The beautiful, seductive and complicated daughter of an inscrutable Asian warlord, Talia al Ghul bears a striking resemblance (in characterization only, not in actual, physical appearance) to Princess Aura, the daughter of Ming the Merciless, the arch-nemesis of Flash Gordon. In the Syfy iteration of her character, Aura has complicated relationships both with her father (Talia, after all, had no particular love lost for Ra's al Ghul until she discovered that he had died in battle with Batman) and her betrothed (in Aura's case, she doesn't particularly care for Barin; in Talia's, she loves Bane, but her father forbids the relationship...or at least that's her narrative. It doesn't necessarily track, given that after her father is gone their relationship appears to remain platonic, but that's a whole other thing). And in either case, seduction of the hero is a key part of her character. In the comics, of course, Talia and Batman have a son--something that could (under some people's interpretations of the events of The Dark Knight Rises, though not ours) happen in the film as well. Aura's frequent attempts to seduce Flash Gordon are very much a part of her character, until in the end she ends up with Barin. Can you think of any we forgot? Chime in at the bottom of the page, on our message boards or on social media!