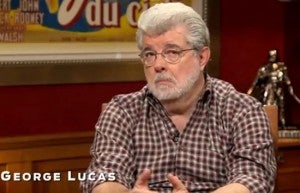 If there's any one clear indicator that Kathleen Kennedy has well and truly taken charge of Lucasfilm since the retirement of founder George Lucas, it's this: George Lucas admitted in an Access Hollywood interview this week that he hasn't discussed the Star Wars sequels with incoming director J.J. Abrams. "I have not spoken to J.J.," Lucas admitted in the interview embedded below. "He's been busy with Star Trek. I'm sure he'll let me know when he's got some questions." When Lucas retired and sold his company to Disney last year, he remained on board as an adviser to the incoming managers and creative types. Earlier this week, Screen Daily reported that filming for this and future installments of the Star Wars franchise will take place at the famed Pinewood Studios in the U.K.