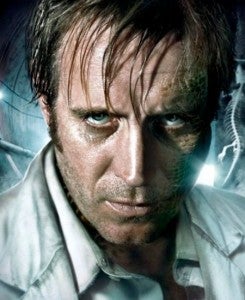 With Marvel movies most people know to stick around until after the credits for a bonus scene. However, with The Amazing Spider-Man being from Sony/Columbia Pictures rather than Marvel Studios, there was some doubt if they would follow the same tradition. Well, there is a brief after the credits scene in The Amazing Spider-Man, so if you want to avoid spoilers then you should stop reading now. The Amazing Spider-Man after the credits scene starts with Dr. Curt Connors being locked up in a maximum security prison cell. However, it turns out that security might not be as high in prison as one would think. There is a mysterious shadowy figure that appears in Connors' cell. The mystery person asks Connors, "Hello, Doctor, did you tell the boy?" Connors responds, "Tell him what?" The mystery person clarifies, "Did you tell the boy the truth about his father?" Connors answers, "No." The mystery person says, "Well, that's very good, so we'll let him be for now." Connors yells, "You should leave him alone!" The voice of the man in shadows is actually being done by Michael Massee. Of course, the fact that the face of the man in shadows is never revealed leaves the door open for Sony to later cast someone else in the official role. Who is this mysterious shadowy figure? Well, the most obvious guess is that it is Norman Osborn, who is referenced earlier in the film. Of course, Norman Osborn is best known by his super-villain identity as the Green Goblin. It would make sense for Sony to lay the ground work to introduce Spider-Man's most famous villain in the sequel. However, there are some other possible theories as to the mysterious shadowy figure that are circulating online. The fact that the mystery person appears in and vanishes from the prison cell doesn't match up with Green Goblin's powers. The vanishing act has some speculating that the mystery person could be Mysterio. But there is also another theory. The fact that the mystery person seems to appear and disappear with lightning and thunder has some speculating that it could be Electro. Who do you think the mysterious shadowy figure in The Amazing Spider-Man credits is?

The Amazing Spider-Man After The Credits Scene Spoiler