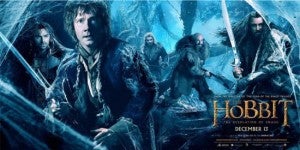 Less than ten minutes ago, Peter Jackson unveiled the new trailer for The Hobbit: The Desolation of Smaug at his Facebook page, and it already has nearly 10,000 likes and 5,000 shares on the popular social networking site. You can see the trailer embedded below. The second of three films to adapt J.R.R. Tolkien's epic fantasy novel by the same name, the trilogy will serve as a prequel to Jackson's Lord of the Rings trilogy, for which he won an Academy Award for Best Picture in its final installment, Return of the King. This year's release was originally intended to be the second half of a two-part film, but during production, Jackson and Warner Bros. decided to split the film down the middle and add a third installment, so the franchise will now end in 2014 instead of this year. The Hobbit: The Desolation of Smaug will be in theaters on December 13.