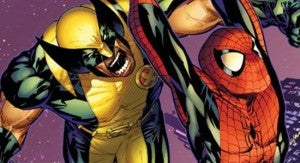 With the movie rights to Marvel Characters split between multiple studios, there's been lots of recent talks about intercompany crossovers involving Marvel characters. Both Hugh Jackman and Andrew Garfield have gone on record talking about how they would love for their characters to appear in The Avengers. Even Vin Diesel got into the rumor game by hinting at a "merging of brands" at Marvel Studios. Of course, Marvel Studios has yet to even officially announce that Vin Diesel will be playing one of their characters, even though Diesel has made it be known that he will be voicing Groot in Guardians Of The Galaxy and playing another unrevealed character much further down the line. While most of the recent character about crossovers between the different studios centers around Marvel Studios recent success with The Avengers team, it turns out that the closest fans likely ever came to a real crossover between different studios was before the rise of The Avengers. In a new interview with the Huffington Post, Hugh Jackman revealed that Wolverine almost had a cameo in the original Spider-Man movie. Jackman said, "In the first Spider-Man -- Kevin Feige reminded me of this -- we really tried to get me to come on and do something, whether it was a gag or just to walk through the shot or something. The problem was, we couldn't find the suit. The suit was stuck in some thing. And so when they were in New York when I was there, we couldn't get it together." As far as doing a cameo now, Jackman said, "So, you know, I actually asked some high level people about it. Because the optimist in me goes, 'Why not? Why can't we do it? You know, a split cast or whatever?' And someone reminded that the amount of money Fox paid compared to the amount of money Disney paid is very different [laughs]. So how you split that pie up? God knows. But in the comic books, what's great about it is they're just mashing together all the time -- and it's awesome. And people are like, 'Yeah, well, let's get this one with that!' And, you know, I still think, one day, there may be an ability to do it."