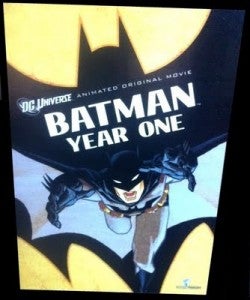 We're approximately one year away from the release of the next installment in Christopher Nolan's tale of Batman, The Dark Knight Rises, but that doesn't mean you can't get more DC films in your player or computer sooner than that! The trailer for the next DC animated film Batman: Year One debuted today exclusively to MTV's Splashpage, and we have the link for you here! After viewing it, I have to say that I'm thoroughly impressed and excited about the film, which will be available for purchase on October 18th. If you're going to be at this year's Comic Con in San Diego, you're in luck, as the film will be shown there on July 22nd at 8PM, followed by a panel discussion! The cast for the animated feature sports Benjamin McKenzie in the role of Bruce Wayne/Batman with Eliza Dushku as Catwoman. Bryan Cranston will take on the role of Jim Gordon with Katee Sackhoff as Sarah Essen. The DVD of the film will also have a Catwoman animated short included, voiced also by Eliza Dushku! Watch the trailer and tell us what you think!