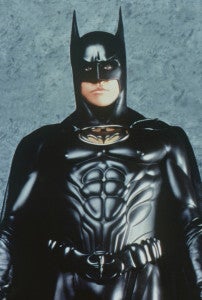 Here's a rather interesting report. According to Express, Val Kilmer has a rather unusual idea for a Batman reunion movie. Val Kilmer played Batman in the 1995 movie Batman Forever. Kilmer's Batman reunion film would feature all the Batman movie actors, including himself, George Clooney, Michael Keaton, Christian Bale, and Ben Affleck. However, it appears as if one of the former Batmans wouldn't last very long. Kilmer is quoted as saying, "I think Christian Bale should get killed right away – just because I think it would be funny." Hmmm…just because it would be funny? It sounds more like Kilmer wants to get the most successful Batman out of the way right in the beginning. Kilmer also added, "Then Michael, George and I can carry on as the bad guys against the new Batman." The article doesn't make any mention of who Kilmer sees as ultimately winning in the showdown between the ex-Batmans and Ben Affleck's Batman.