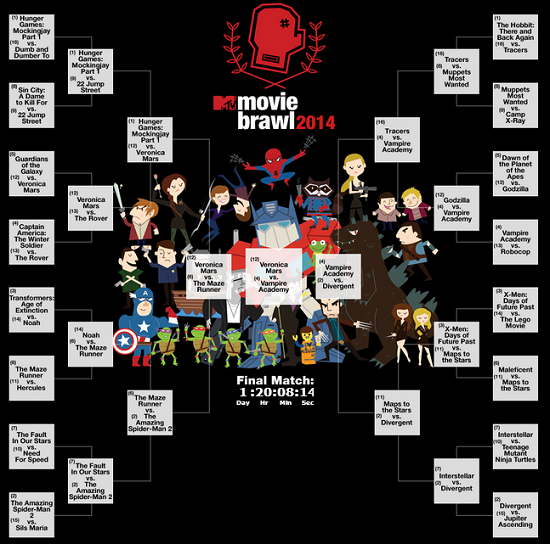 After 2013's top-grossing film was The Hunger Games: Catching Fire, overcoming Iron Man 3 to take the title, it may be no surprise that in spite of the conventional wisdom that movies with female leads don't drive box office interest, the MTV Movie Brawl 2014 is down to two such movies right now. The voting started with 32 eligible films, including most of the year's biggest (like Guardians of the Galaxy, Captain America: The First Avenger, Transformers: Age of Extinction and The Amazing Spider-Man 2), and has narrowed over the course of a couple of weeks down to just two final films: Veronica Mars and Vampire Academy. Like so many online, fan-driven competitions these days, participants can (and are encouraged to) vote as many times as they'd like--so it probably says more about the fandoms than the movies themselves--especially when you consider that a number of the movies most likely to crack $500 million at the worldwide box office were out of the running early. In fact, the competition is seeded like NCAA's March Madness tournament--and both #1 seeds (the latest installments of The Hobbit and The Hunger Games were eliminated before the final four competitors were named. Veronica Mars started the tournament as a 12-seed and Vampire Academy a 4.