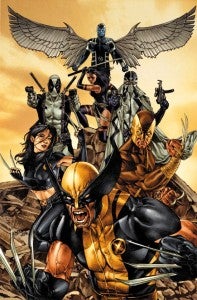 With The Wolverine set to hit theaters later this month and X-Men: Days Of Future Past pegged for a May 23, 2014 release date, where will 20th Century Fox go next with the X-Men franchise? According to a new report from X-Menfilms.com, an X-Force movie is in the works. As proof of their claim, the site points out that 20th Century Fox recently registered the domain name X-ForceMovie.com. Of course, studios often register domain names to protect their intellectual property on a wide variety of names, which may or may not eventually become a film. Still, the fact that Fox registered the domain name does at least show they are thinking about the possibility. Also, 2oth Century Fox's creative consultant Mark Millar has dropped hints in the past about the possibility of an X-Force movie. Since superheroes have proven to be the most viable subject matter for blockbuster movies, 20th Century Fox probably won't sit on their X-Men properties for long, because they certainly don't want to risk the movie rights reverting back to Marvel. We would be surprised if there wasn't already a game plan in place for what comes next after X-Men: Days Of Future Past, and a X-Force movie would certainly be a way for Fox to provide a fresh spin on the X-Men franchise. Could there be an announcement coming as early as San Diego Comic-Con next week? 20th Century Fox has been rather mysterious about their panel plans.Wouldn't it be insane if X-Force joins Avengers 2 in the summer of 2015?

X-Force Movie To Reportedly Follow X-Men: Days Of Future Past