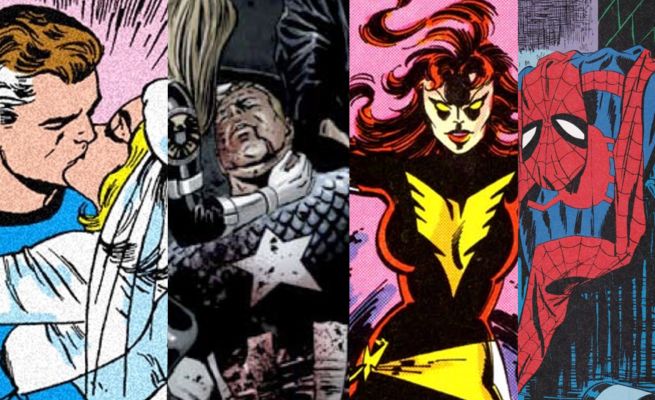 ComicBook.com is approaching the end of its rundown of the 75 most iconic moments in Marvel Comics history. But first let's take a look at entries #30 to 16. 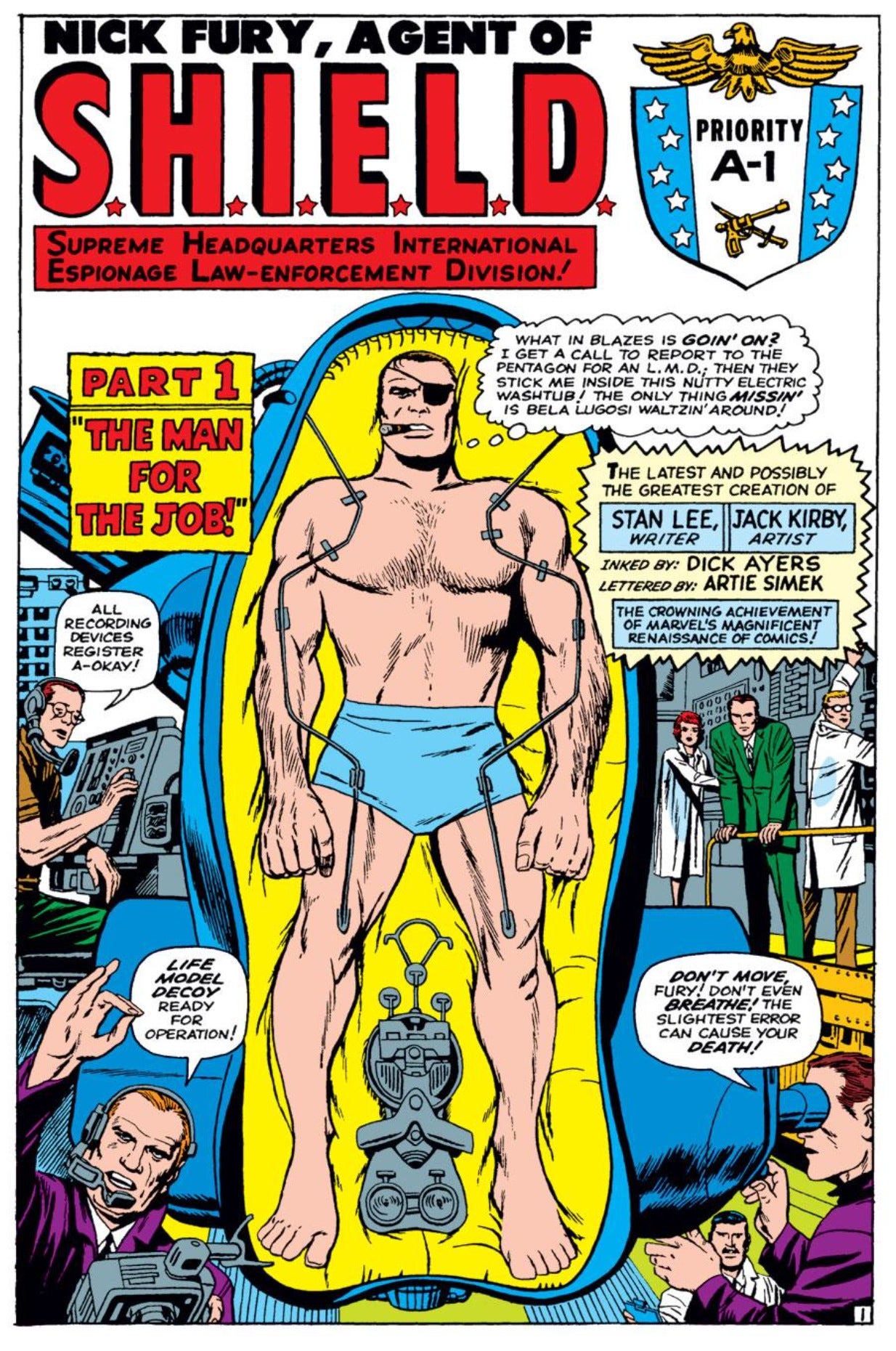 The Nick Fury character would get the first of many radical facelifts in the mid-1960s when he was transformed by Stan Lee and Jack Kirby into a James Bond-esque super spy, working for the fictitious government agency, S.H.I.E.L.D. From the very opening image of the issue, which depicts Fury being strapped into something he dubs an "electric bathtub," it was patently clear that the world of S.H.I.E.L.D. would be filled with some wacky, high-concept technology, and fantastical, over-the-top espionage. Meanwhile, Fury would evolve over the years, but the decision to cast him as the head S.H.I.E.L.D. was one of the most important editorial moves Marvel made during the era. 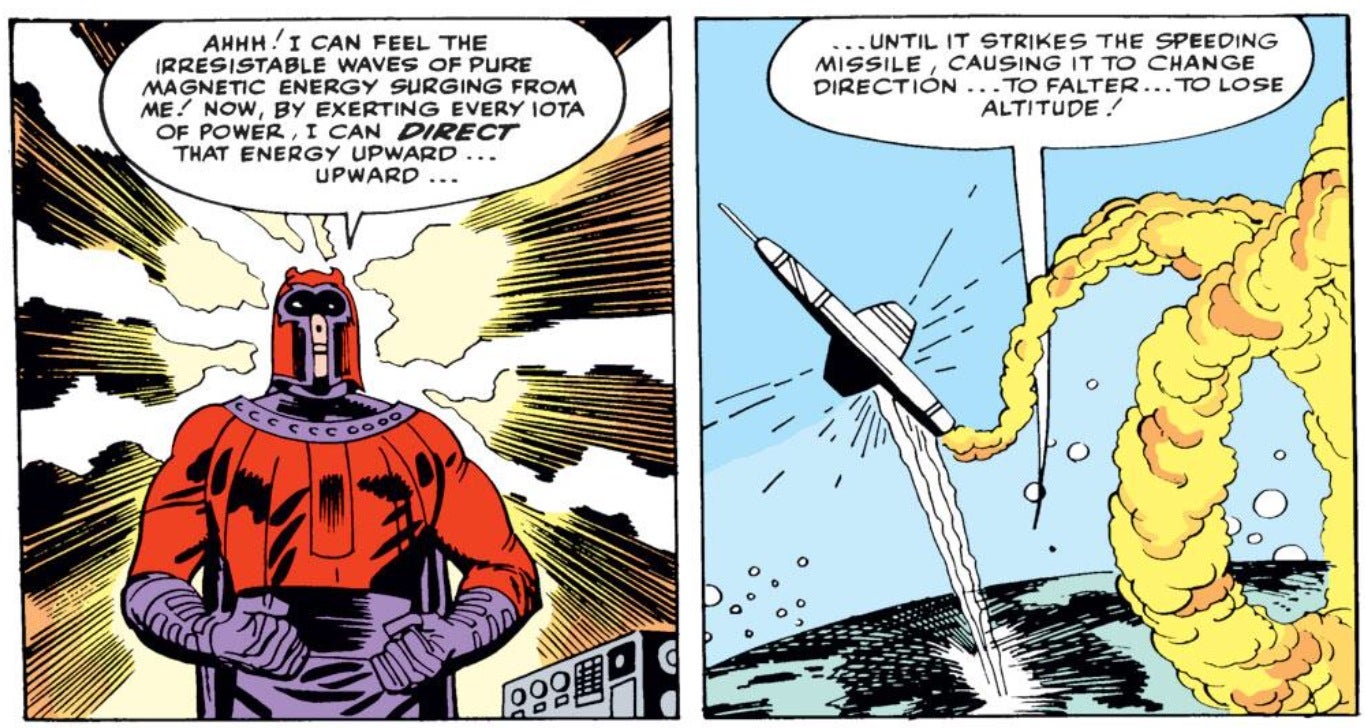 While the second iteration of Charles Xavier's X-Men would go on to become more famous than his first group of mutant heroes, the opening issue of the X-Men series did manage to introduce one of Marvel's most complex and unique villains. Through Magneto, Stan Lee and Jack Kirby provided a different kind of voice for the fictitious pro-mutant movement. Xavier preached a more peaceful approach to advocacy, but Magneto believed that mutants needed to demonstrate their superiority to mankind via any means possible. The first battle between Magneto and the X-Men at the Cape Citadel military base, would be later adapted in the X-Men: First Class film. 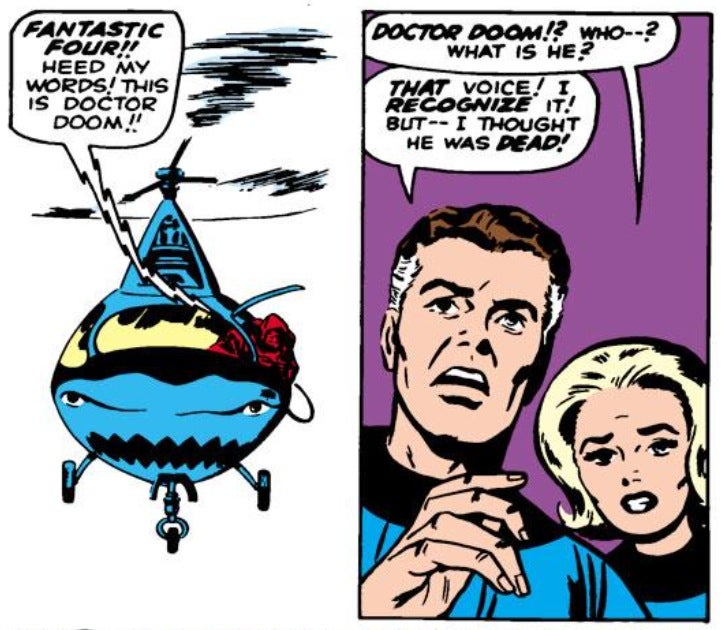 As one of Marvel's most famous and enduring supervillains, Doctor Victor Von Doom burst onto the scene in 1962 and immediately became the arch nemesis for the company's flagship superhero team, the Fantastic Four. Doom makes his grand entrance by collapsing a net over the FF's Baxter Building headquarters, demanding that Sue Storm be taken hostage. Reed Richards immediately recognizes the voice of their antagonist as a former classmate who was expelled for causing an explosion. The remainder of the issue is filled with time travel and superheroics – a perfect encapsulation of what made The Fantastic Four such a phenomenon when it was first published. 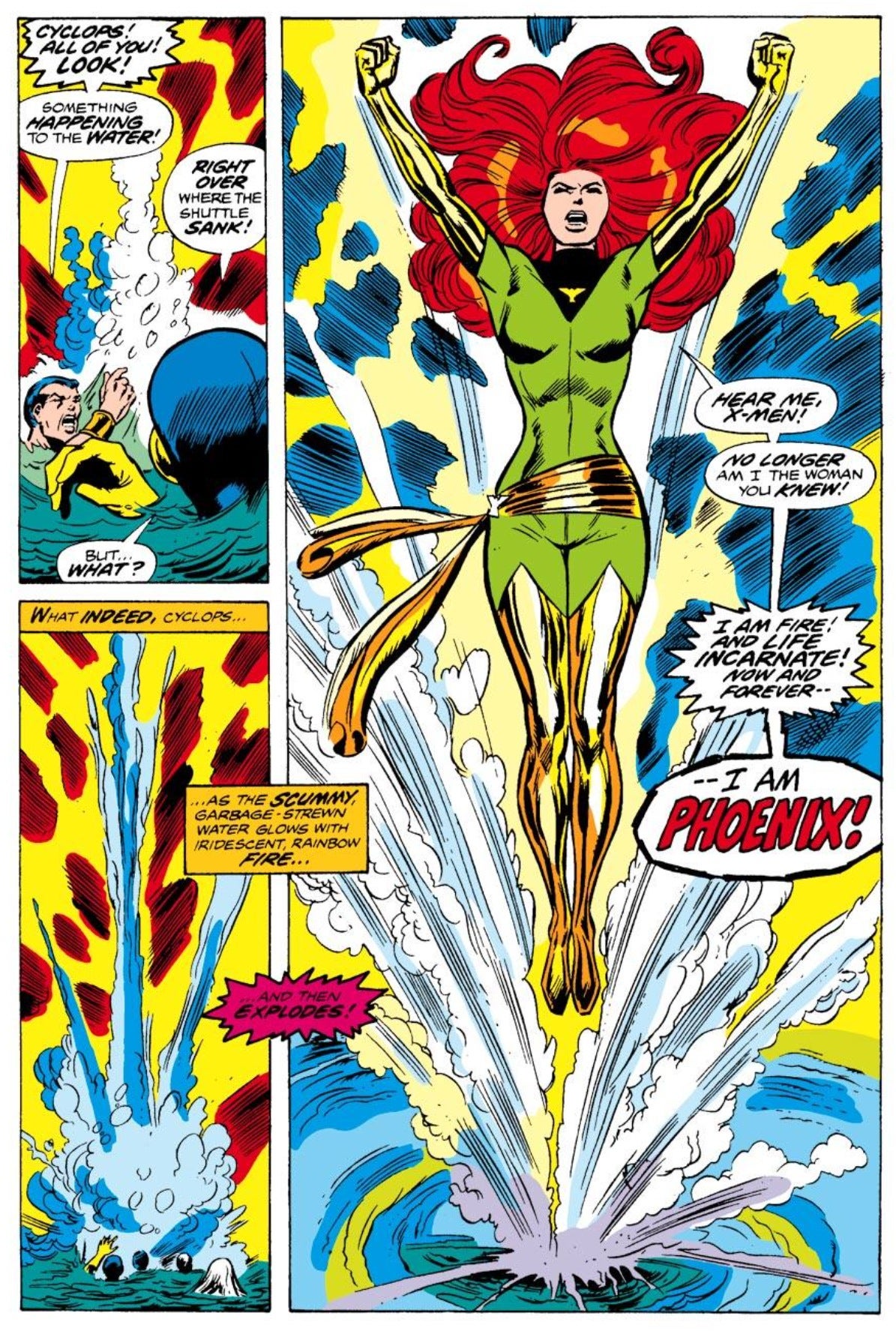 Fairly early into his iconic run scripting X-Men, Chris Claremont and artist Dave Cockrum introduced a major status quo change for longtime Marvel mutant Jean Grey. After Grey seemingly died in a plane crash, the character remerged from the Jamaica Bay waters wearing a brand new costume and declaring herself the Phoenix. The comic book moment would be later referenced in 2003's X2 film. Meanwhile, Jean's transformation would tie directly into what many consider to be one of the greatest Marvel stories of all time, the "Dark Phoenix Saga." 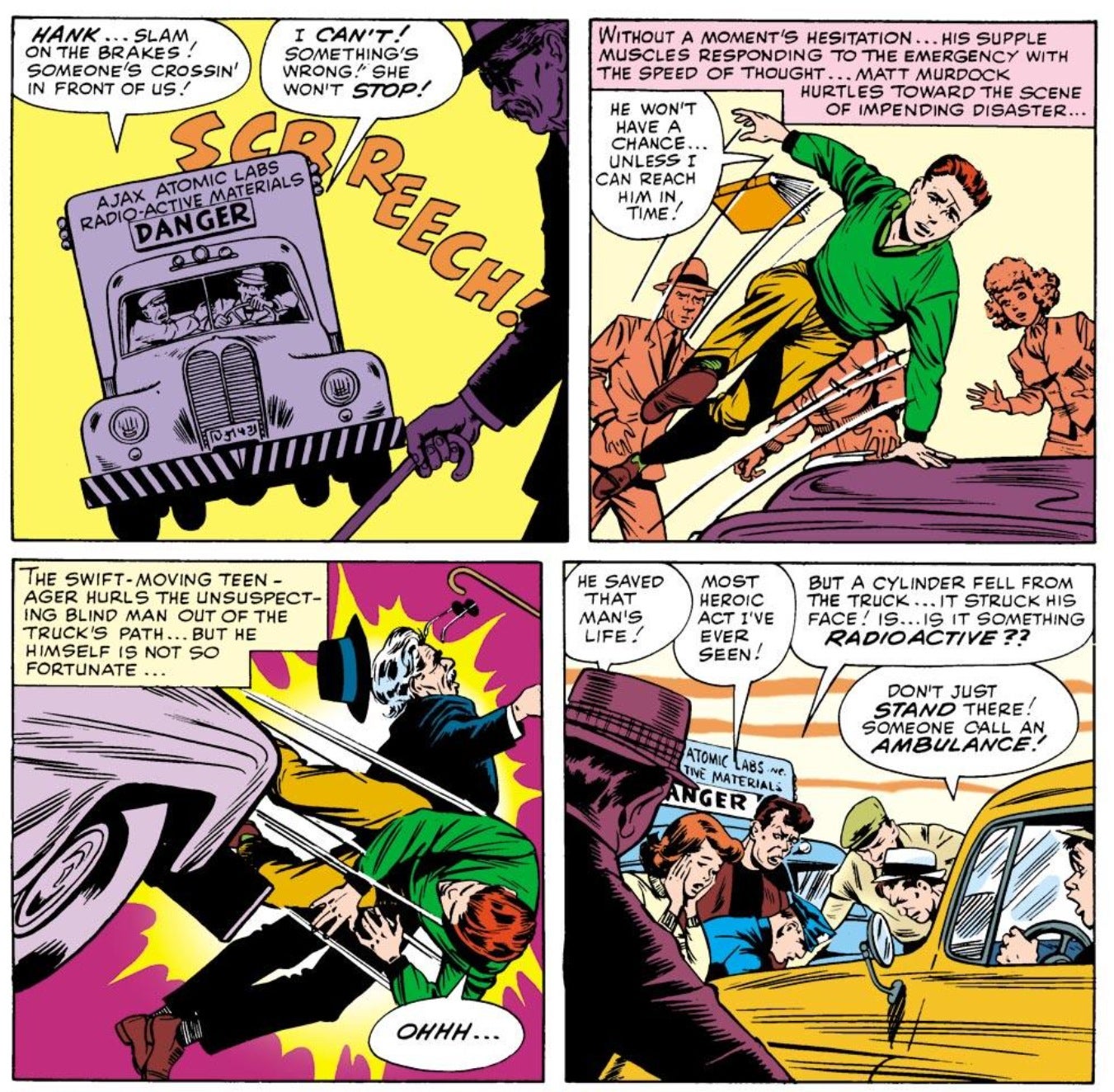 More than a decade would pass before the Daredevil character would be completely redefined and popularized by Frank Miller, ultimately making his origin story more important in retrospect. However, those who were on the Daredevil bandwagon bore witness to one of Marvel's more unique origin tales – one about a young man who sacrifices himself to save an old man and is blinded as a result. The story of how Matt Murdock went blind would be referenced in countless other Daredevil stories over the years, and has even been paid homage in other series like Teenage Mutant Ninja Turtles. 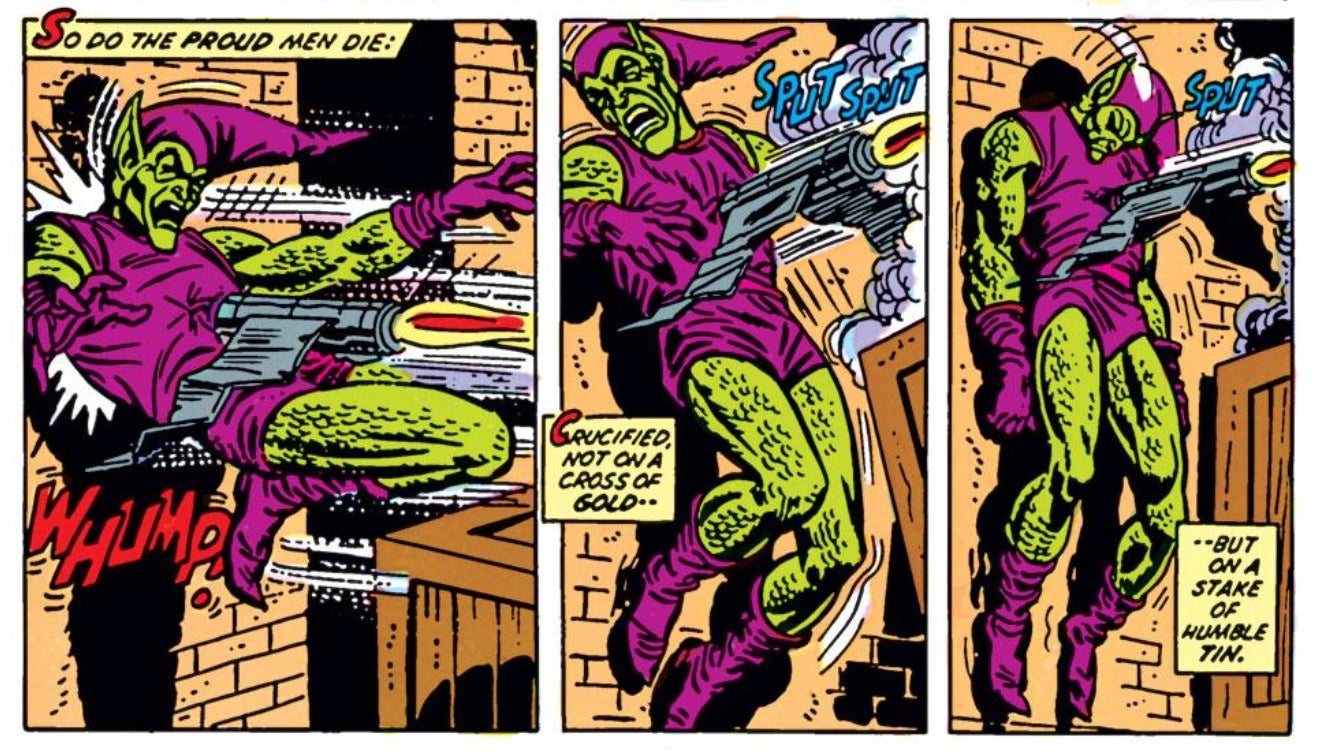 25. Death of the Green Goblin

After Spider-Man's arch nemesis, the Green Goblin murdered the innocent Gwen Stacy "The Night Gwen Stacy Died" storyline (or was it Spidey's webbing that killed her … hmm …), fans hoping for some comeuppance for the Goblin were not disappointed by the equally iconic follow-up issue. Over the course of his battle with the Green Goblin, Spider-Man debates crossing over to the dark side and exacting his revenge by killing the villain. However, he stays true to his mantra of, "with great power, there must also come, great responsibility." He thoroughly beats the Green Goblin, but then has to dodge one last sneak attack via the Goblin's glider vehicle. The Goblin accidentally impales himself on his own weapon, a scene that would be later referenced in the first Sam Raimi Spider-Man film. The original Goblin, Norman Osborne, would remain dead for more than 20 years before he was resurrected in the 90s. However, it remains one of the most iconic villain deaths in comic book history, and a fitting end to a genre-changing story. 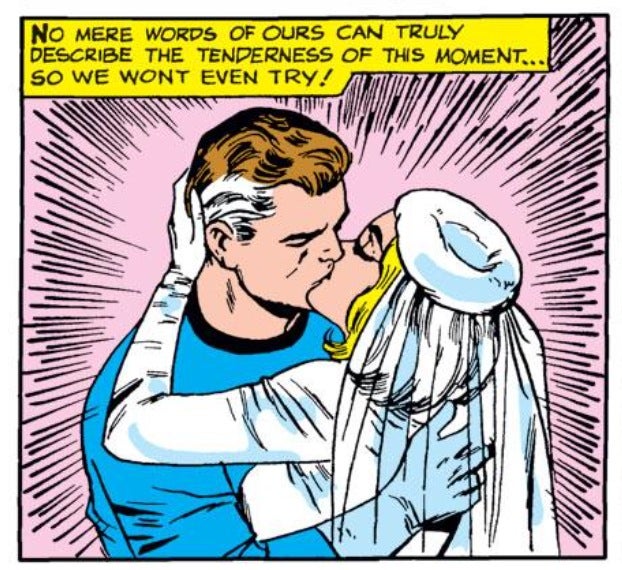 24. Sue and Reed Get Married

Since their debut in 1961, the Fantastic Four have been called the "first family of comics" and with good reason. Prior to the FF's creation, it was rare to find a comic book where there was specific emphasis placed on how all of the character's interacted with each other. These unique character dynamics were taken to the next level by Stan Lee and Jack Kirby when they delivered one of the first superhero weddings in the industry between FF teammates Reed Richards and Sue Storm. The moment arguably marks the dawn of the comic book "event" – a storyline that transcends the usual parameters for the medium. While it hasn't always been smooth sailing for the couple, the marriage has managed to survive to the present day – quite an achievement for comic book standards. 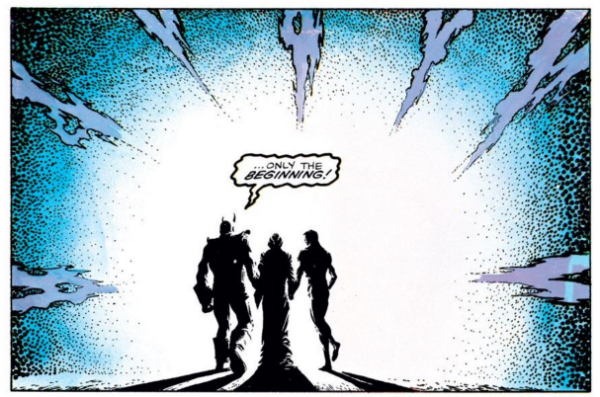 Marvel's first original graphic novel features a groundbreaking level of realism and tragedy in how it treats the death of the Kree superhero Captain Marvel. Rather than have him die in battle or in an accident, Jim Starlin, who provides scripts and pencils, diagnoses Mar-vell with cancer. After an assortment of Marvel heroes pay their final respects to Marvel, he has one last vision and is ushered to the afterlife by two of his oldest rivals – Thanos and Death. It's a provocative and memorable conclusion to one of the most emotionally stirring comic books to ever be published. 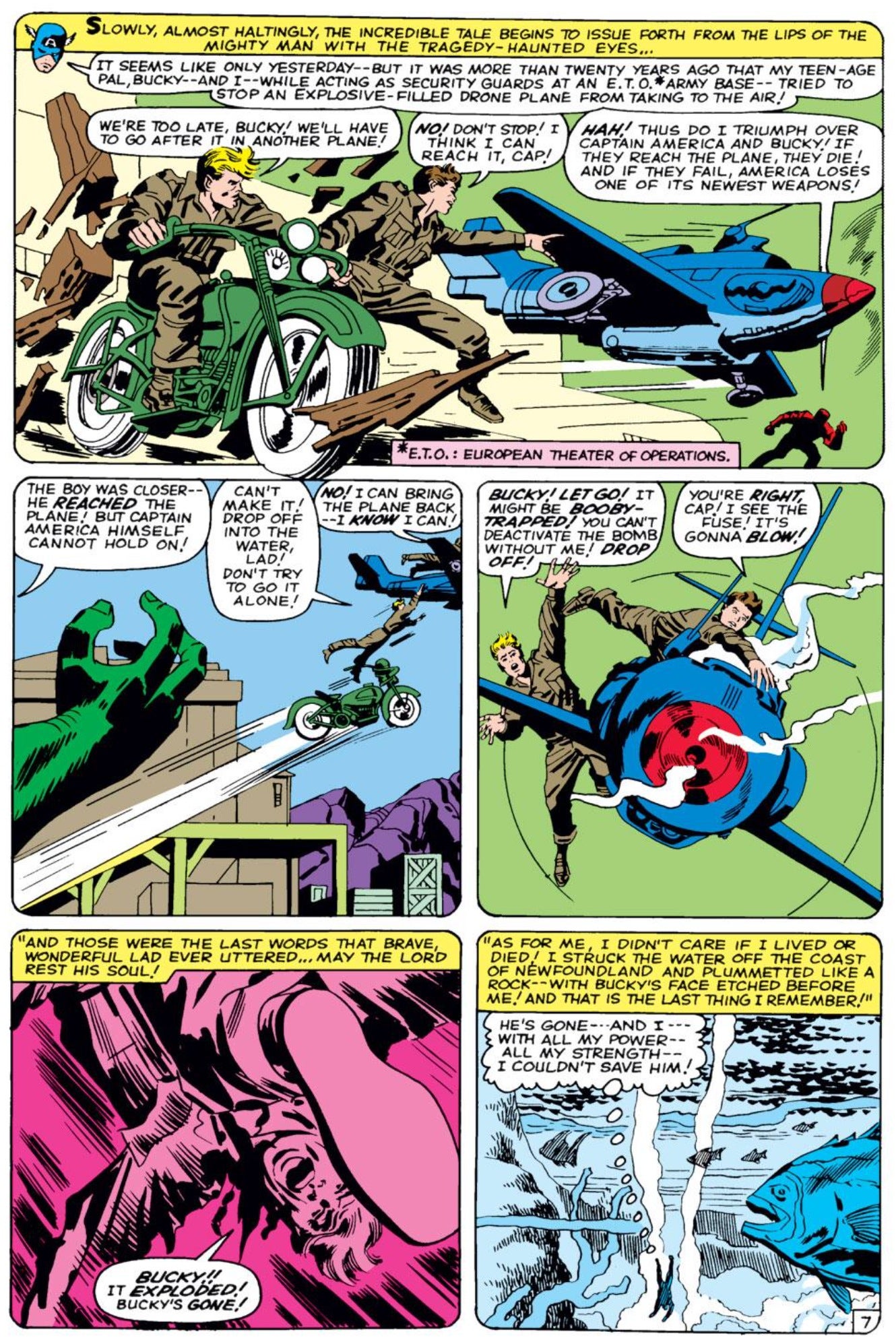 While some cynics might argue that the impact of Bucky Barnes's death has been negated by his resurrection as the Winter Soldier, for more than 40 years, his demise stood as one of the most important and irreversible moments in Marvel history. A few pages after Marvel's first superhero, Captain America, was resurrected for the Silver Age in Avengers #4, we learned of the guilt he harbored for his World War II buddy's death. That remorse and responsibility followed Cap around through the decades via countless stories. How Cap was able to survive that exploding plane and not his best friend, was one of those cruel, rhetorical questions that was destined to remain unanswered … until it wasn't. 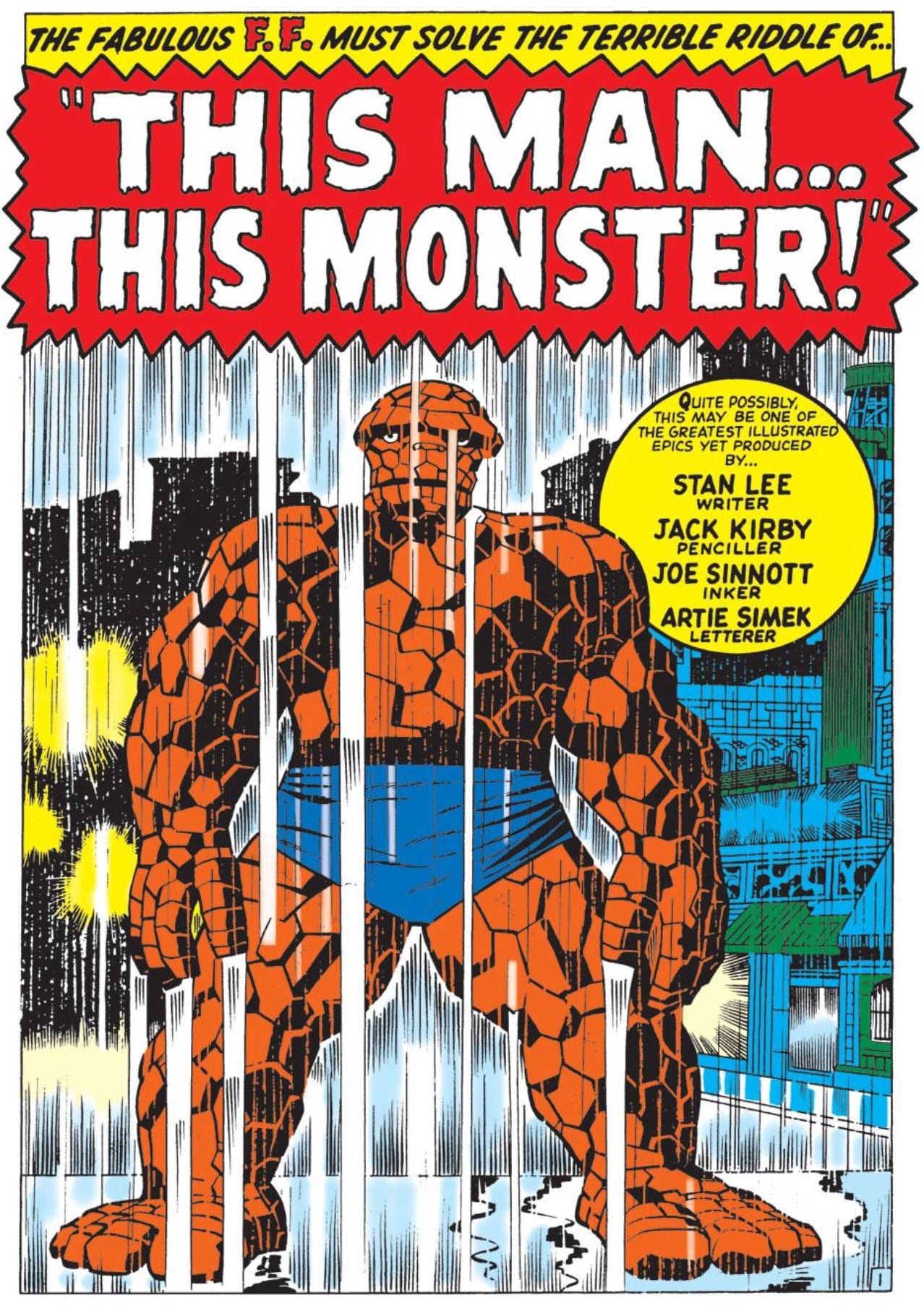 Considered by many critics and readers to be the finest story Stan Lee has ever written, "This Man … This Monster!" is a master class in narrative structure and characterization. From the opening Jack Kirby splash page depicting the sullen, misunderstood monster standing in the rain, to the stirring conclusion, the comic provides a roller coaster of emotions for readers. In this story, the Thing is robbed off his powers, which are then assumed by an imposter who goes to the Baxter Building in an attempt to destroy the Fantastic Four. But the imposter Thing ends up sacrificing himself to save Reed Richards after recognizing how selfless he is. With the other Fantastic Four members mourning the presumed death of their friend, the real Thing arrives at the Baxter Building. 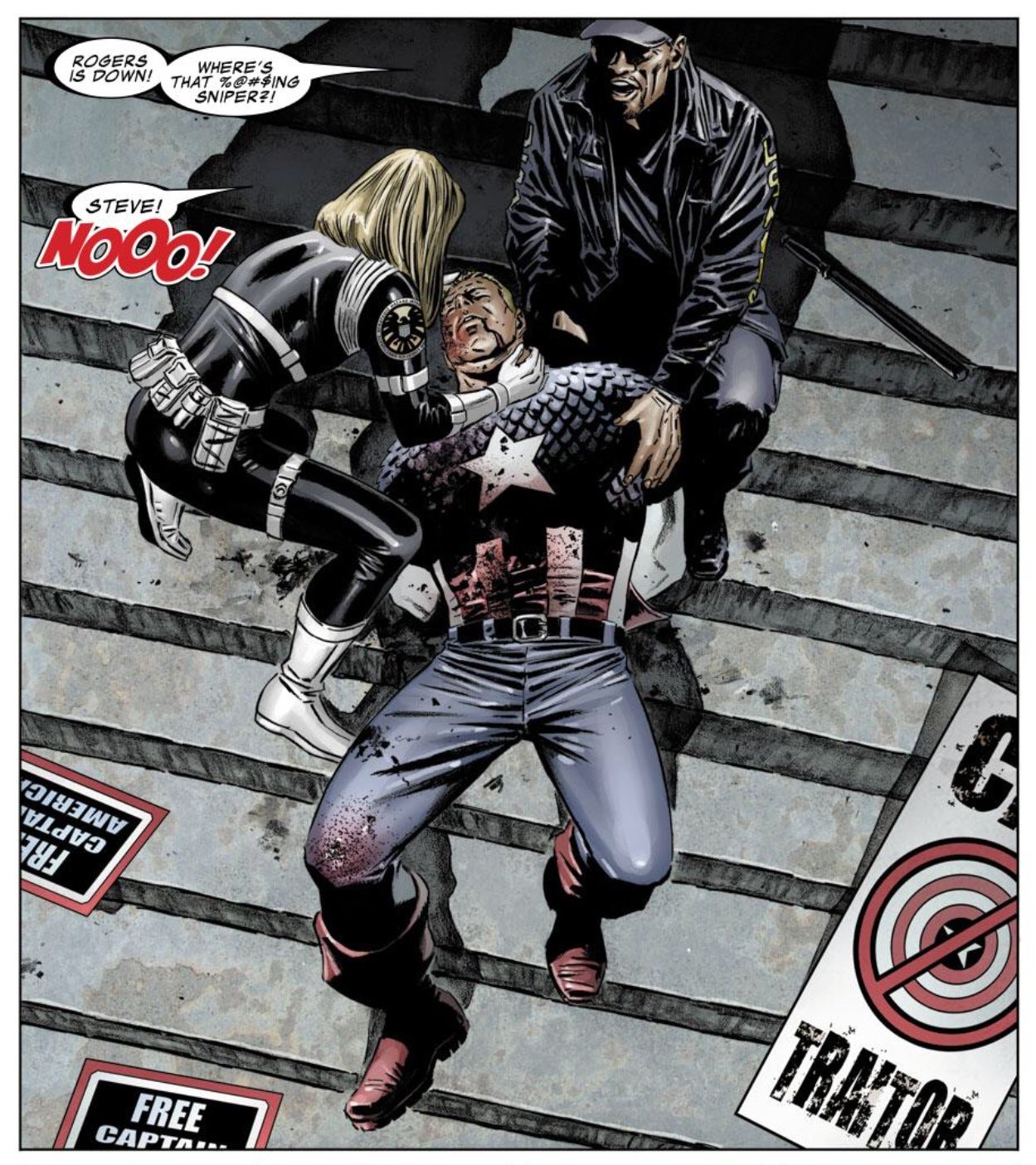 20. The Death of Captain America

In one of the most shocking and iconic storylines to be published over the past decade, Marvel controversially killed off one of its greatest heroes in Captain America. Because of this moment – which came in the aftermath of the Civil War event – the comic became the highest selling single issue of 2007 and was the topic of various cable news and newspaper reports. Bucky Barnes took Steve Rogers place as Captain Americafollowing the comic, and of course Rogers was resurrected a few years later (especially with a Marvel Studios movie in the works), but a comic depicting the death of a major character hadn't generated that much mainstream buzz since the "Death of Superman" nearly 15 years earlier. 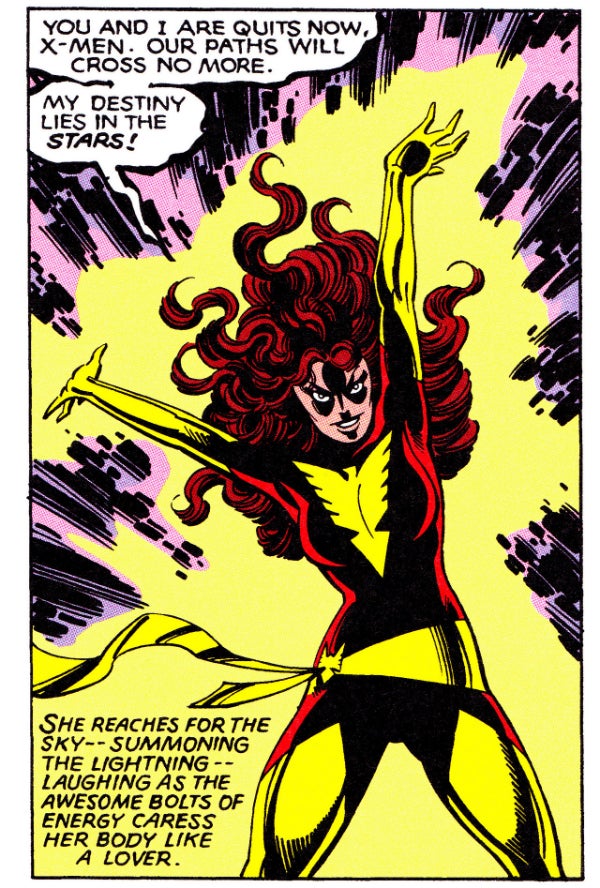 19. The Rise of the Dark Phoenix

Chris Claremont and John Byrne brought Marvel's X-Men franchise to extraordinary new heights during their much ballyhooed creative run, in large part because of the daring stories the duo told. No story is more famous than the "Dark Phoenix Saga," when Jean Grey was possessed with the dark cosmic force of the Phoenix and was transformed into a planet-killing demigod. Byrne's visual of Jean revealing her dark side to the teammates marks an absolutely bone-chilling moment in X-Men history. It's a moment that embraced the new world order of comics – an order where even virtuous heroes could be seduced by a greater, incomprehensible force. The comic book industry had presented a number of "mind control" stories, where a hero was forced to do wrong against his or her will, but never anything on the cosmic level of the Dark Phoenix. 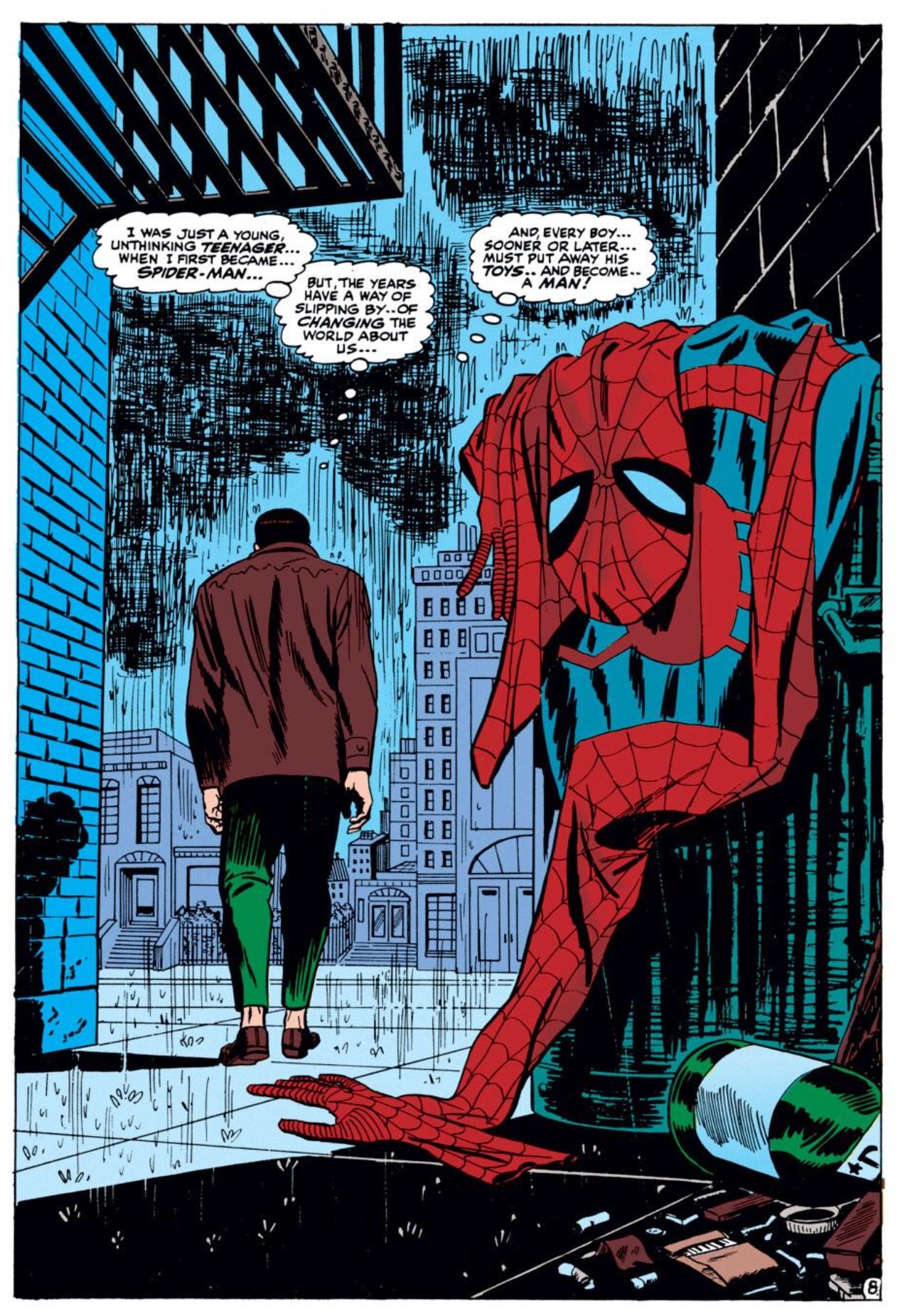 Peter Parker has functioned as Marvel's poster child for reluctant hero dating back to his very first appearance in Amazing Fantasy #15. However, even after he flirted with the idea of quitting his responsibilities as Spider-Man, it never felt quite so possible as when he dumped his costume in a garbage can in Amazing Spider-Man #50. John Romita Sr.'s stunning cover to this comic might actually be the more enduring visual of Peter's reluctance, but the interior panel is famous in its own right. During this time in Amazing Spider-Man history, the book had been transitioning from a straight-up superhero tale, to one with elements of teen romance. Now Peter was faced with choosing between getting abused from all angles as Spider-Man, or living the normal life of a teenager who just so happened to have two beautiful women in Gwen Stacy and Mary Jane Watson fighting for his affections. Of course he eventually ends up as Spider-Man, but can you blame a guy for that moment of weakness? 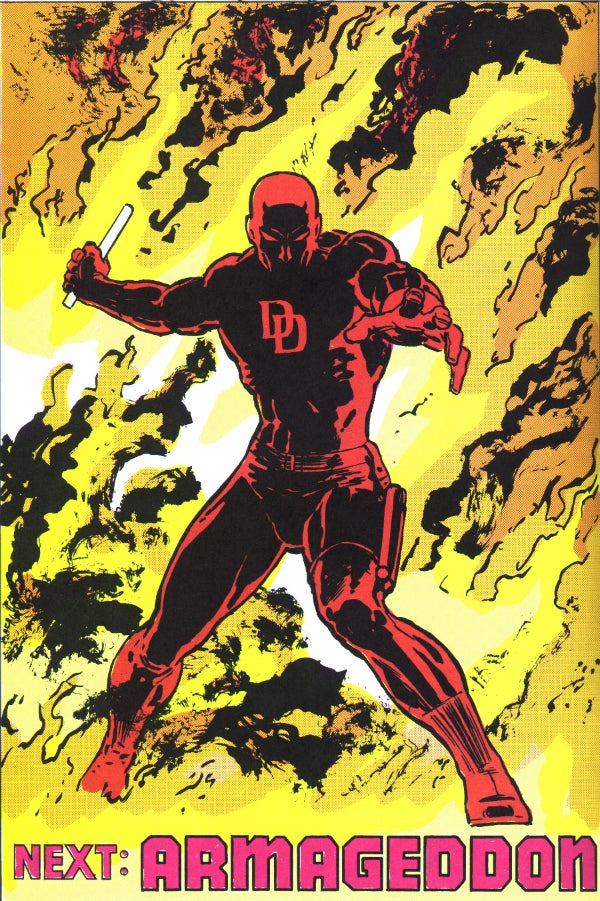 17. Daredevil, Out of the Fire

It is the most iconic visual from what is arguably the greatest Daredevil story of all time – a gorgeous splash page from the masterful David Mazzucchelli depicting Daredevil emerging from a raging fire in Hell's Kitchen rearing to fight Nuke, the super soldier gone amok. Of course, to get the full emotional impact of this sequence, one has to read Frank Miller/Mazzucchelli's "Born Again" in its entirety. In it, Daredevil's life is destroyed by the Kingpin, after the villain learns that the "Man Without Fear" is actually blind attorney Matt Murdock. Matt's is left utterly broken until he is found by his mother, a nun, a woman he had not seen in decades, and nursed back to health. The scene in question involving Daredevil and the fire marks the hero's spiritual resurrection – a moment of absolute renewal and triumph for one of Marvel's most unique characters.

16. Wolverine Fried by the Sentinel

The cover to the second and final part of the classic dystopian storyline "Days of Future Past," advertises, "This issue: everyone dies." But still, even with such lofty rhetoric, nobody could have predicted that one of the most popular mutants of all time, Wolverine, would meet a brutal and violent end at the hands of the frightening Sentinel robots. Beyond Wolverine's universal appeal, in terms of the comic's storyline, he was one of the X-Men's last hopes in reversing a catastrophic event that doomed mutant kind in this dark future timeline. Of course, by the end of the Chris Claremont/ John Byrne issue, Wolverine was  alive and well again, but his "Days of Future Past" death is one of those moments that has managed to stay with readers more than 30 years later – contributing to the arc's iconic status.