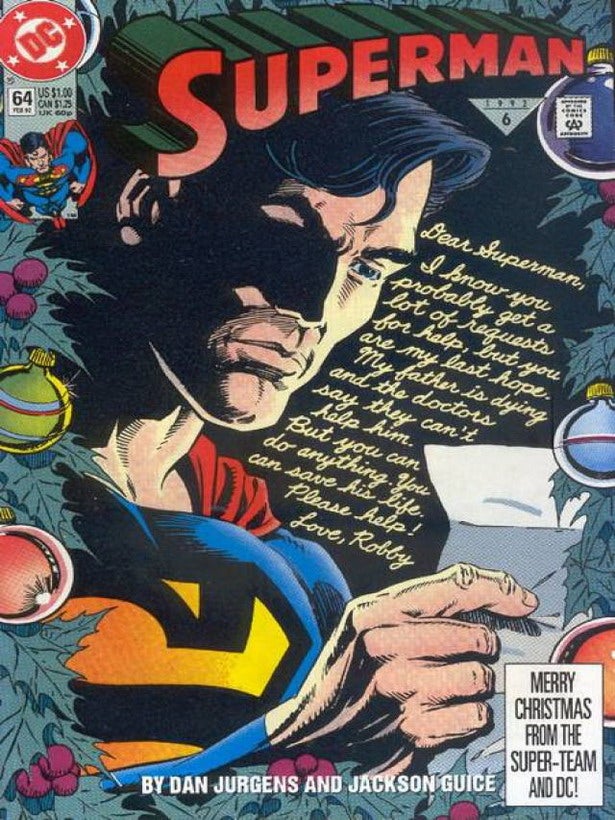 For two years in the early '90s, writer Dan Jurgens gave fans an unconventional, and very human, idea of what Superman does at Christmastime in a pair of stories titled "Metropolis Mailbag."

The second story, actually, fell just after the 1992 death of Superman, so while the first dealt with the emotional toll that taking on a never-ending battle of a different type took on Superman, the second was more about the heroes of the DC Universe trying to get their heads around the kind of difference Superman made during his life.

The concept revolved around Superman visiting the Thirty-Fourth Street Post Office (in Metropolis, not New York, although there's a major one there, so it's likely that's why they gave it the address they did) and answering mail. 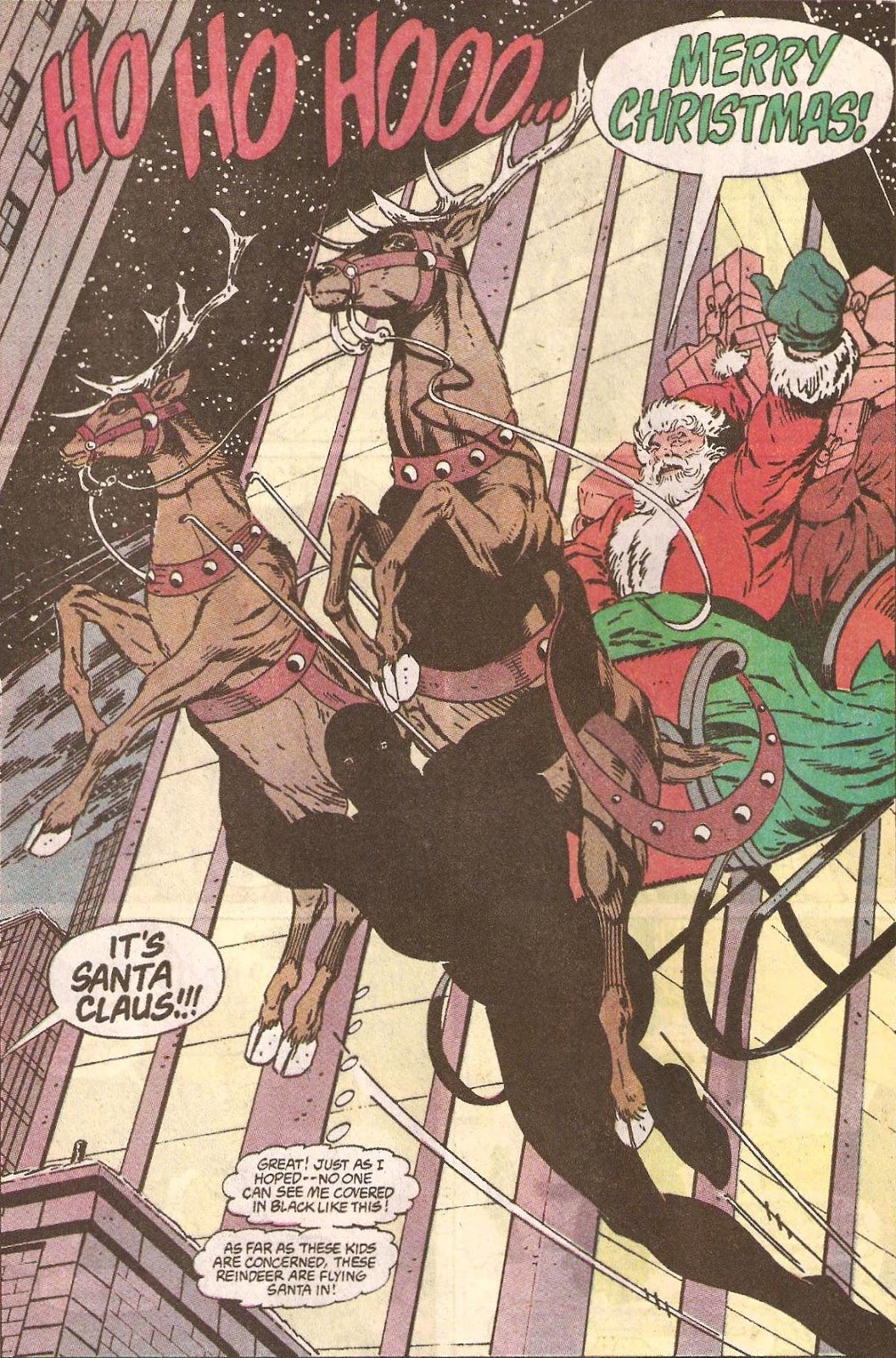 Much like Santa Claus, Jesus or anybody else who is a larger-than-life figure who gives hope to the public, Superman apparently receives a lot of mail...and in the comics, Jurgens dealt with that by saying that around Christmas, he would try to answer as much of it as he could, making a difference in the lives of everyday people rather than dropping buildings on the heads of supervillains.

Superman says that it's his most thankless and depressing job: while he might make headway aggainst villains, the mail never ends...and a lot of it is just crap. Business propositions, shady characters trying to make themselves sympathetic and on and on.

"Don't they realize that you'd never do something like that?" Lois, who's there ostensibly to write a story for the Daily Planet, asks her then-fiancee. "Don't they understand what Superman is all about?"

That is, of course, a big thrust of this story. During the post-Crisis era, writers like John Byrne, Marv Wolfman, Roger Stern, Louise Simonson and Jurgens himself were tasked with reinventing a Superman who had been significantly depowered, whose parents were still alive and who, generally speaking, was more down-to-earth. The"Metropolis Mailbag" stories did that in two different ways: by demonstrating his love for humanity and his frustration with the apparent futility of the task and those who would try to take advantage of his good nature.

The story saw Superman bringing an aging Holocaust survivor face to face with her sister for the first time in fifty years and the last before her aged, ailing sibling passed away.

"I still can't believe a man as important as you has the time to help me!" Says the woman as Superman flies her to Germany. "There must be so many more urgent matters that require your attention."

Superman dismisses this notion, though, and the story reminds us that at his core, Superman is a very egalitarian hero. There aren't those more or less "worthy," there are just those who need help, and Superman is someone who can use his great abilities to bring them that help.

It also delivered on his humanity in a different way: he found a letter from a young boy asking to help excise an inoperable brain tumor from his father. Superman, who went to tell the boy there are things that even he cannot do, arrived minutes after the man had died and had to explain that, at the end of the day, he isn't a god. The only hope he could offer them is a very human one: encouraging his wife to help others by donating her husband's usable organs.

The story was a clever one, essentially an anthology but contained within a standard comic book size; a third story dealt with budget cuts that would have meant poor kids didn't get gifts and a visit from Santa -- until Superman agreed to stand in for Santa and contacted Bruce Wayne for help funding the presents.

The story is melancholy and heartwarming; it's very much like a real Christmas, as challenging as it is fulfilling, and the art by Jackson (Butch) Guice matched the tone perfectly. 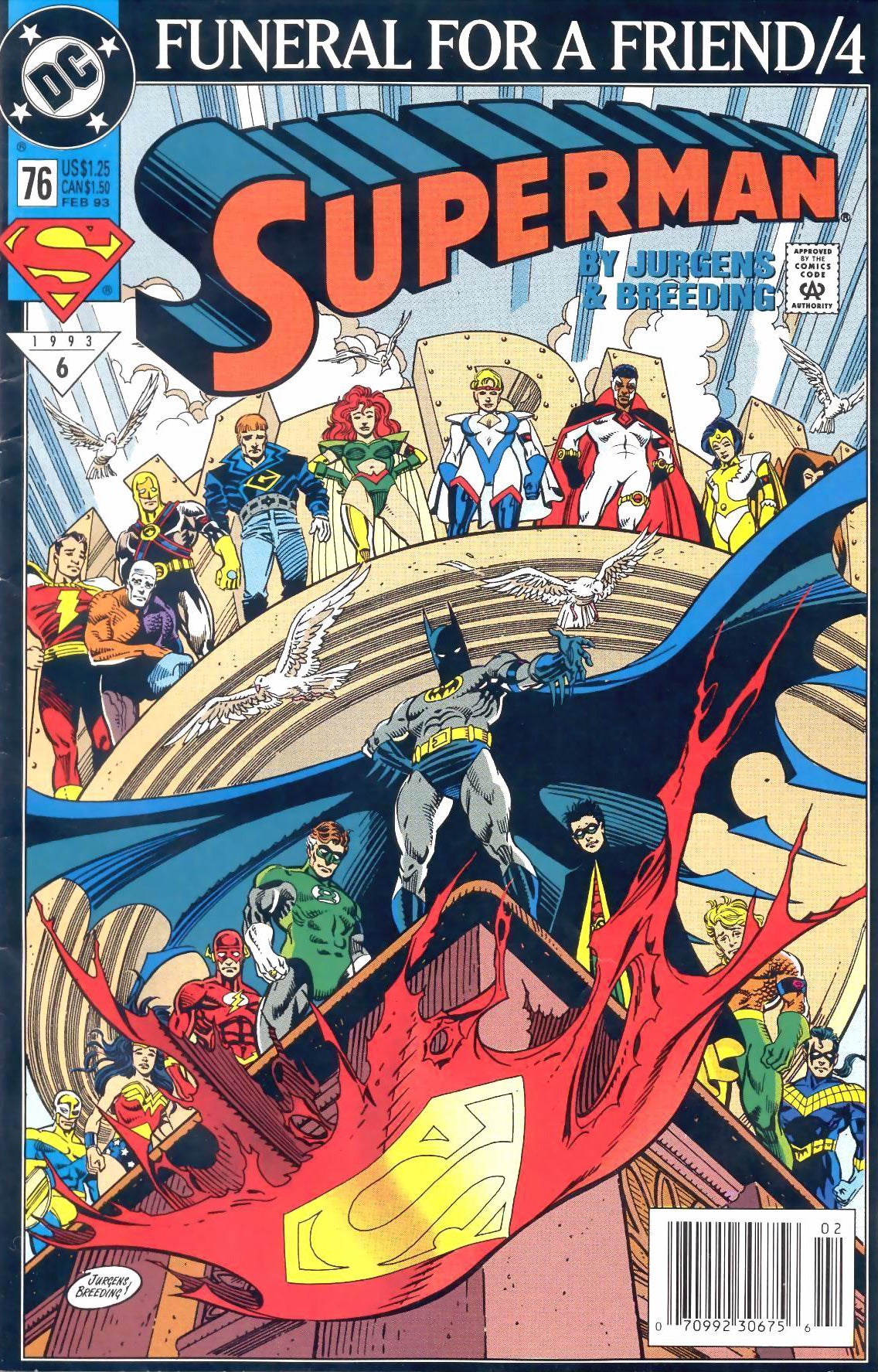 "Metropolis Mailbag II", from Superman #76, saw other superheroes picking up the slack from something that Superman would do every Christmas--spend the day answering pleas for help from people whose letters (addressed only to "Superman") ended up in the dead letter file at the Metropolis Post Office throughout the year. The first "Metropolis Mailbag" had been a nice little story following the Man of Steel through one snowy night, which as a non-reader I had never encountered.

The second dealt with, among other things, a young man named Mitch Anderson, whose home had been wrecked during the Justice League's melee with Doomsday. Written by Jurgens as a cynical teenager who idolized Guy Gardner and didn't see the value in Superman, Mitch's tune changed when the shattered League lay unconscious around him and Superman surrendered the upper hand in his fight with Doomsday to return to the burning house and save the Anderson family -- again, dealing with the idea that Superman doesn't see shades of need; stopping Doomsday came second to saving the lives of three strangers.

As a character, Mitch had grown a lot in the days between when Superman fell and when the second Mailbag happened, as his visit to Superman's tomb indicated. His story was doubly touching because while he struggled with guilt and sorrow in Metropolis with Jimmy Olsen, the Justice League was helping to rebuild his home back in Ohio and reunite his estranged father with the loved ones he almost lost.

Years later, the character would be recycled as a one-note super-wannabe who founded the Supermen of America, but for this one month, the depth and emotion with which he and the other characters were handled helped to tell not only a great Christmas story, but a story that answered that recurring question, "Why do we still need Superman?".

If Christmas stories are among the schmaltziest in popular fiction, then certainly a gleaming, inspirational figure like Superman is almost a natural fit for them. There have likely been dozens of Superman Christmas stories over the years, but there's something touching and human about the "Metropolis Mailbag" tales that make them stand out among those this writer has read.

They're available on ComiXology, Amazon and Barnes & Noble as electronic comics for $1.99 each. Check them out if you can.

A Very Superman Christmas: Looking Back At The Metropolis Mailbag Stories