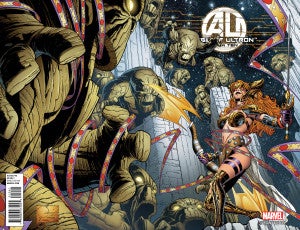 Marvel Chief Creative Officer Joe Quesada has provided this look at his variant cover for Age of Ultron #10, focusing on Angela, the former Spawn supporting character who's being imported into the Marvel Universe to appear in Guardians of the Galaxy. Check out the solicitation text below.

Marvel is proud to unveil Marvel Chief Creative Officer, Joe Quesada's, jaw dropping wraparound variant cover to Age of Ultron #10 – featuring ANGELA! To save the Marvel Universe, Earth's Mightiest made the most controversial decision of their lives resulting a disaster unlike any they've seen before. But with one final shot to make things right, can they turn back the hands of time and restore everything to its former glory? And if they can't what happens next?! Age Of Ultron #10, by the jam packed, blockbuster creative team of Brian Michael Bendis, Bryan Hitch, Carlos Pacheco, Brandon Peterson, Alex Maleev, Butch Guice, David Marquez and Joe Quesada, leaves no stone unturned and has an ending nobody can see coming!