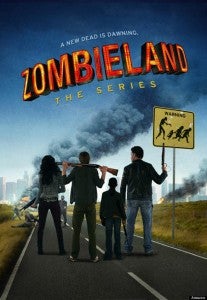 In a surprising move, Amazon Studios has passed on the pilot for Zombieland, meaning that there will be no full season pickup for the expensive comedy pilot on Amazon Prime's streaming service.

No official announcements have yet been made regarding shows that either have or have not been picked up, but Deadline reports that both Zombieland and Browsers failed to gain traction with audiences and won't go forward to series.

Zombieland is the more surprising of the two; at a time when Arrested Development is readying to come back on Netflix and a Veronica Mars movie raised an unprecedented $5 million on crowdfunding site Kickstarter, the smart money seemed to be on a popular cult property generating enough heat to get it through the round of pilots, pickups for which would be at least in part based on fan response in the form of a survey.

The average customer review published on Amazon for the show was 3.7 stars, heavily weighted toward a five (out of five)-star rating, but many of the responses on the lower end pretty scathing.

Much of the harshest criticism, of course, came from those unfavorably comparing the show to the cult-hit movie on which it was based. The pilot was written by the same writers as the film and featured the same characters, all of whom had to be recast since the film's stars have either already were, or have gone on to be, big stars in feature films.

Browsers averaged a bit lower (3.1/5), although it also didn't come in with the existing cache or expectations of being based on a cult-favorite movie. The comedy pitted a shrewish Bebe Neuwirth against a batch of fresh-faced interns working at her news website and while it had Neuwirth's considerable talent and Daily Show writers behind it, it may have been a bit too much inside baseball and dry humor for a pilot.

At present, the pilots being offered in the "Amazon Original Pilots" program are available only as free streaming items to those enrolled in Amazon Prime. Whether that will change for the shows not picked up isn't yet clear. Certainly one way to recoup expenses on a failed series produced through Amazon would be to offer it as a paid download for fans who did enjoy it.