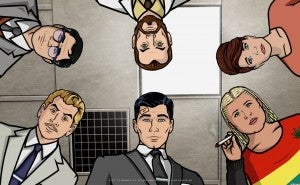 FX announced today that the network has ordered a 13-episode fifth season of their hit animated comedy Archer.

At the same time, FX announced that Archer will be submitted into the Best Comedy Series Emmy category this year rather than the animated category.

Season 4 of Archer will conclude on April 11. So far in 2013, it ranks as cable’s second-best series among men 18-34, behind only The Walking Dead, which is of course TV's overall best-rated series.

Archer Renewed For a Fifth Season