In a new interview with Comic Book Resources, Arrow writer/producer Marc Guggenheim admitted that he's excited to have the opportunity to craft a DC Universe for television, beginning with Arrow and branching out to The Flash with other characters appearing in the shows as well. 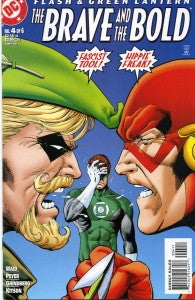 "Honestly, I'm just excited to help be a part of expanding the DC Universe. I think one of the big thing that appeals to me about comics in general is the idea of the shared universe," Guggenheim told CBR. "It's a lot of fun to be able to do that in television, and growing up one of the things I enjoyed was the Six Million Dollar Man and The Bionic Woman and the way those two shows would interact with each other. We're at least a season away from Arrow interacting with 'The Flash," but the potential for that is really exciting for me."

He went on to say that, even though the first season had focused on grounded, real-world-style characters and avoided using anyone with powers, each character will--like in the comics, or the Marvel Studios movies--have their own unique tone and set of rules, and having one exist doesn't necessarily mean taht the writers will start breaking the rules for the other willy-nilly.

"I think a lot of people are justified in asking 'What does this mean for Arrow in terms of its tone?' And my answer is that the trick that we have – and this is a challenge we've discusses a lot and have an awareness of how to face it head on – is the fact that Arrow is like Iron Man where The Flash will be The Hulk. And just as The Hulk coming out did not change the tone of the Iron Man movies, The Flash will not change the tone of Arrow," the producer explained. "We're very cognizant of what Arrow is all about, and I think the Marvel movies demonstrate that each piece of a universe can have its own feel. Thor is consistent with the tone of Thor while Captain America is consistent with the tone of Captain America's character. Arrow's tone will remain consistent much in the same way, and we are looking forward to expanding our canvass a bit. And judging from the announcement, I think the fans are looking forward to it as well."