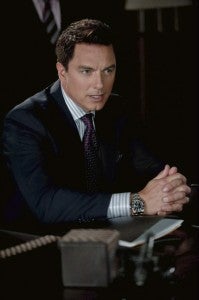 According to TVLine, Arrow will welcome back one of the show's most popular season one recurring players for at least two episodes this year. That would be Torchwood alum John Barrowman, who played Malcolm Merlyn the Dark Archer in the show's first season. The dynamic of the character will obviously be a bit different next year; his son, Tommy, was Oliver's best friend, but that character died in the season one finale, meaning that not only will Oliver's relationship to Malcolm change, but there is presumably an entirely different motivation for Merlyn and dynamic between the characters in season two. The report says that it's not clear whether Merlyn will have survived the seemingly-fatal injuries he suffered in the finale or if he'll be returning in flashbacks, as a ghost or by some other contrivance. This year, it seems as though the central antagonists will be the League of Assassins, a group associated with a number of DC villains including Ra's al Ghul.

Arrow Confirms the Return of a Fan-Favorite Guest Star