Veteran TV, film and comics writer Marc Guggenheim, currently serving as executive producer on The CW's Arrow, is one of a number of creators from all over the comics spectrum donating a story to Rise: Comics Against Bullying, an anthology series whose creator hopes to distribute it for free to teens to help discourage bullying and help victims better respond to their situations.

The project, being funded via Kickstarter, has just over three days left  and is currently on pace to be funded -- almost exactly.

According to the site for the crowdfunding effort, about a third of all students claimed to have been bullied in 2014, and a UCLA study found that kids doing the bullying are still seen as "cool." It's against that backdrop that they're trying to get these comics into as many hands as they can, with contributions from creators who have donated their time and work.

Guggenheim joined us to talk about the campaign, which enters its final three days with just about 10% of its goal yet to achieve. 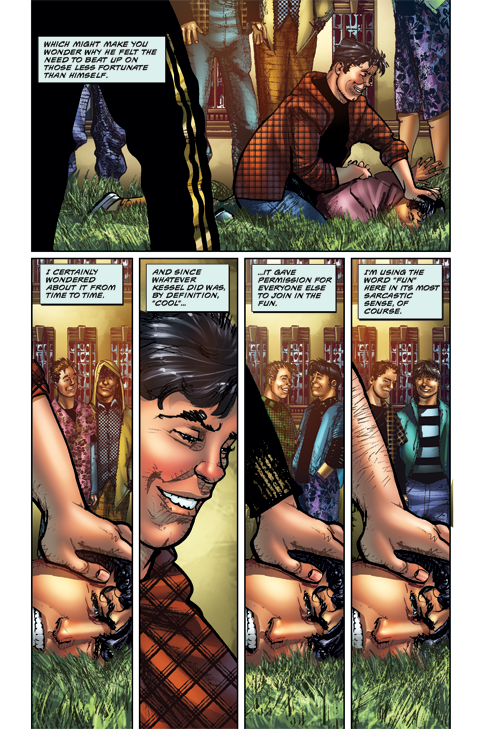 What's the elevator pitch for this? Because my first instinct, looking at it, was that it was going to be a graphic novel, whereas it's actually a series.

I’m always of the opinion that the difference between a series and a graphic novel is truly one of distribution format.

That’s particularly true in the case of a project like RISE, which is an anthology of stories about bullying written and drawn by some of the best talents (present company excepted) in comics. Like how I snuck in that elevator pitch?

How did you come to be involved in RISE? Were you a "founding member" or did you get recruited?

I was recruited by Kristopher White, one of the founding members. I worked with Kristopher back when he and I were both working for ABC and he knew I’m a comic fan and writer.

How exciting is it to work with somebody the caliber of Howard Chaykin on art?

Oh, it’s thrilling. I’ve been fortunate to collaborate with Howard on a few things now: Blade, Wolverine, Justice Society and a hertofore-unpublished-but-hopefully-one-day Spirit story. I love writing for Howard — not just because he’s an amazing artist and a legend in the business, but because he’s a super awesome guy who’s fun to work with.

When Kristopher reached out to me about writing a story for RISE, I reached out to Howard to see if he’d draw it and he didn’t hesitate. He’s a class act in ever way.

How autobiographical (or not) is your story? Obviously you're quite a success yourself, so looking at the sample pages from the high school reunion I could see it being you in the right circumstance.

Thanks! No, my story is pure wish fulfillment. I’ve never actually been to any of my high school reunions. But I wanted to do a story for kids who are bullied that basically makes the point “it gets better.”

Hopefully, the story — and, yes, my own life experience — drives that point home.

Bullying has become one of those causes that is omnipresent these days, and yet anecdotally, it doesn't seem like things are getting better. Do you think a project like this is more about helping victims cope, than about affecting a change in the social hierarchy that makes these things happen -- or do you think we should be aiming higher than that?

Great question. It’s hard to say for certain whether incidents of bullying are on the rise — no pun intended — or decline. I’m not aware of any statistics or studies, so it’s something that’s hard to measure. Bullying is definitely much more in the public consciousness these days. I think that’s a good thing. A very good thing. But it certainly can contribute to the feeling like things are not getting better.

My hope is that RISE will continue to keep the problem of bullying in the forefront of the zeitgeist. But you’re right that the other goal of the project is to help kids who face bullying know that they’re not alone, they’re not “strange,” that this is a problem that is, sadly — but hopefully also comfortingly — universal. And that it gets better.

What do you think makes comics a venue through which these stories can be effectively told? Is it the strength of the medium, how (relatively) inexpensively they can be produced, the audience demographics…?

I think it’s a combination of several factors. First, I think comics are a wonderful venue for telling stories of all stripes. Comics are more adept than a lot of mediums at capturing a wide range of tones, which I think is extremely advantageous when approaching the subject matter of bullying.

The stories can be humorous, touching, dark, provocative — the medium of comics does it all. And I suppose that, on some level, there’s always been a reasonably large overlap between being a comic fan and being bullied.