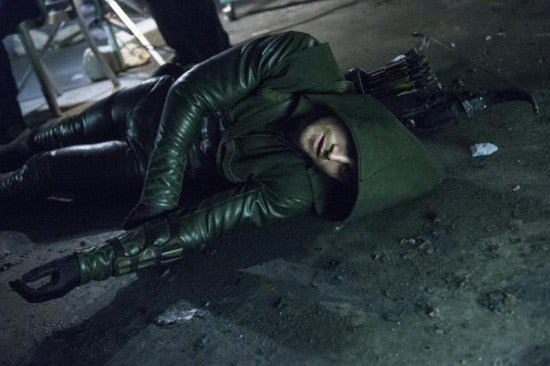 Tonight's midseason finale of Arrow had an awful lot to do, so it was frankly not quite as chock full o' DC Comics nuts as usual.

That doesn't mean there weren't a handful--and that some of those weren't both major and also potentially laying the groundwork for a Flash series.

Barry Allen came up with the mask

In the comics, Barry Allen...well, he reads comics. When he got speed powers, he didn't become The Flash (at least in the original mythology) because he had a score to settle or a great tragedy that haunted him. It was because he'd read the 1940s adventures of The Flash--Jay Garrick--in comic books growing up and saw the similarities to his own abilities.

So it it really that surprising that he's the one who told Ollie to get a mask?

(We cover this and some related trivia at more length in the link.)

The burger joint where Barry and Felicity head off to when Oliver wants a little privacy is a DC Universe staple. it's not the first time it's been referenced on the series, but it's also been a while, so we figured it was worth a mention (like Kord Omniversal's quiet reappearance last week as the designer of the supercollider). 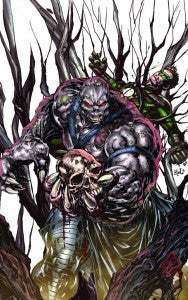 Not only do have Cyrus gold walking around with concrete-density skin, but when Diggle makes his way to the guy's apartment, what's in his open journal? A certain poem:

"Solomon Grundy, born on a Monday, christened on Tuesday..."

That, along with the disfigurement done to his face when the explosion rocked him and then that battery acid or whatever it was dripped down on him, certainly suggest that we'll see a version of Solomon Grundy much closer to the comics sooner rather than later.

When Barry turns on the news about the S.T.A.R. Labs Particle Accelerator, the correspondent from Central City is an Asian-American journalist. Some part of me immediately wondered if it was Linda Park, although I admittedly didn't get a good enough look at her, or the screen, to be able to guess at nationality or see whether she was named.

Of course, in the final scene in Central City, just before the cataclysmic event at the particle accelerator, she does come back on the air and identify herself as Linda.

That would be the reporter wife of Wally West, Barry's nephew and the third Flash in the pre-New 52 DC canon. We haven't seen Wally or Linda in the past few years, but it's interesting to note that she's older than Barry here. 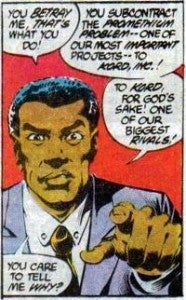 It was difficult to hear the name of the S.T.A.R. Labs CEO mentioned in Linda's report, but it sounded like "Harrison Wells."

There's nobody by that name in the DC canon that we can find, but there's a Garrison Slate, who founded S.T.A.R. Labs. The Garrison/Harrison similarity is enough for us to stick it here, especially with a Flash series on the horizon that might want to use S.T.A.R. Labs quite a bit more than Arrow ever has.

If the DC and Arrow Wikis are correct, his appearance in "Three Ghosts" marks 13 total appearances on Arrow for Hilt before his death at the hands of Cyrus Gold.

That's an odd coincidence because the character--created by Arrow executive producer Andrew Kreisberg and artist Mike Norton in an issue of Green Arrow and Black Canary--also appeared in 13 comic books prior to the New 52 reboot and hasn't been seen since.

Maybe he'll last a little longer if Green Arrow gets a movie franchise. It would take a while to reach thirteen there, right? 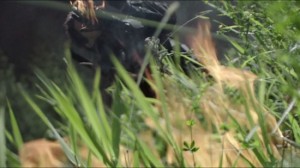 We've already seen that Slade Wilson will indeed take on the role of Deathstroke the Terminator on the island. Up until now, though, it's been suggested that he died there, probably at Oliver's hand, and that he wouldn't be moving to the modern day.

Of course, nobody watching the show actually believed that--especially after the equally-dead Malcolm Merlyn showed up rejuvenated this year.

It's arguably not surprising, then, that the source of Brother Blood's modified Miracle serum is Slade himself, appearing more as fans of the comic books would recognize him (with the eyepatch, that is) and running the show.

Bringing Deathstroke to the present at the same time Slade is getting powers on the island makes us wonder: how long can they sustain Slade's island subplot without some of it becoming repetitious? Certainly there's little risk of that now, while Slade is teamed with Oliver and squaring off against Ivo and his men...but once the truth about Shado's death is revealed and Slade takes aim at Oliver? It seems as though there's a finite amount of time for the pair's island adventures, then. Maybe I'm wrong; I kind of hope so, since Slade has been such a great addition to the series and drives a lot of the drama and chemistry on the island.