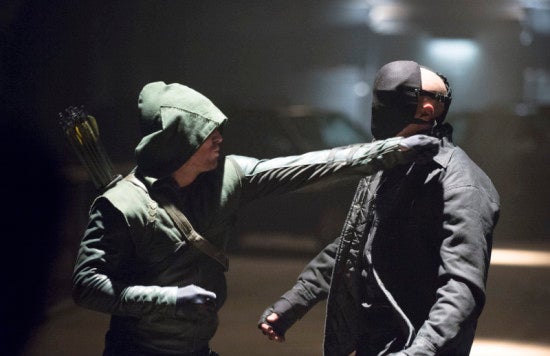 Just three hours before the two-part Arrow midseason finale event begins, The CW have released a look at what to expect from this week's "The Scientist" and next week's "Three Ghosts."

You can see the one-minute trailer embedded below; with a little luck, we'll get something a little more focused on "Three Ghosts" tonight after "The Scientist." One thing that's notable is that this ad features a shot of what seems, pretty clearly, to be Slade Wilson throwing Oliver through the glass case in which he houses his Green Arrow costume, implying that the classic DC villain--currently portrayed as one of Oliver's closest friends in the island flashbacks--will be making his way to the present day sooner than later. Similarly, Shado seems to be telling him to give up his career as Green Arrow, suggesting she's "home" now, too.

Of course, the title "Three Ghosts" puts a little bit of a question mark on anything like that.

"The Scientist" debuts tonight at 8 p.m. EST on The CW.