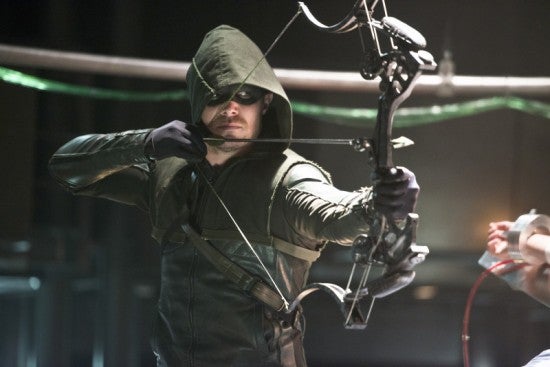 There's only five episodes left of season two of Arrow, and "The Man Under the Hood" hits the ground running in this final sprint. ...Or should that be a marathon? The series is finally done with skip weeks, fill-ins, sporting event-related pre-emptions and reruns, and will kick off five new episodes in a row this week, culminating with the finale. Now that some of the women in Ollie's life know more of his secrets, things may never be the same. It shouldn't be a surprise to anyone paying attention up to this point that both Laurel and Thea's reactions to last week's major revelations will play a big role in this episode (and presumably in the season going forward), although they don't do it at the expense of the show's A plot, which remains Team Arrow's battle against Deathstroke. 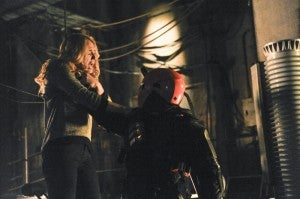 As Ollie and his team fight to protect Starling City, personal forces may be just as in the way as dangerous ones. The stakes have never been higher for our favorite vigilante. This week, the team is forced to deal with the fallout from last week, with not only Laurel and Thea's ever-changing status quo but Quentin Lance in jail and Queen Consolidated in trouble, taken over by Isabel Rochev, who is helping Slade assemble an army for Brother Blood. Surprisingly, all of these beats get addressed, with nothing feeling like it's either ignored or handled in a careless and cursory way. Laurel, in particular, is handled well here with a couple of key moments being either enabled by, or at least passing through, her. Director Jesse Warn maneuvers around the episode's twists and turns smoothly. The usual strong performances from the cast are present, with Willa Holland especially outstanding as Thea. After "The Man Under the Hood," things will never be the same.

Arrow Non-Spoiler Review: The Man Under the Hood