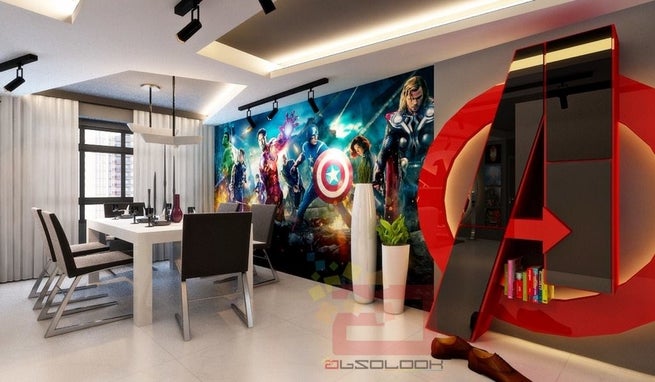 Finally, your entire house can be a tribute to the Avengers! Absolook Interior Design remodeled the inside of a Singapore home to be the complete Avengers headquarters for even the mightiest fan.

In the living room, you'll find a floor to ceiling Avengers logo that can be used a a bookshelf. Next to that logo: a wallpaper of the Avengers movie poster, seamlessly placed onto the wall and lit honorably. The couch looks directly at the Coulson approved TV, mounted in a S.H.I.E.L.D. logo. Alongside the mount, each Avengers has their very own character poster on a canvas mounted to the wall behind standing surround sound speakers.

It doesn't stop there, though. Moving into the kitchen, you'll find green cabinets paired with ceiling paint to make the lights look like their erupting through the roof above. Of course, the Hulk is smashing through the wall opposite the sink, so you can look at him as you sit and eat.

Then, there's the Iron Man bedroom. The walls and sheets are colored to match the Iron Man theme, but that's not even close to the best part. The TV is mounted in the middle of a giant Arc Reactor chest plate which is facing a wall-sized Iron Man in his classic hand-up pose. The ceiling also features the Iron Man Arc Reactor.

You can view images of the apartment in the gallery below. According to Absolook Interior Design's Facebook page, you can get a quote to revamp you house as Avengers Tower for no obligation!