Last week was a huge week for releases and on top of the ones that have already been reviewed here at ComicBook.com, it seemed like it would be as good a time as any to launch a weekly review round-up. With a busy, crazy week of news behind us, though, it didn't happen right away--so instead we're going to take a quick look at a handful of last week's books, as well as one or two of the titles released this week. For ease of browsing, we'll rate each book out of five stars. 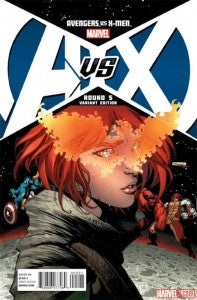 This title continues to be just an absolute dog.

Until Avengers vs. X-Men, I'd always been a fan of John Romita Jr.'s artwork (although, frankly, it's stylized and not right for every situation), but it's been downright dreadful in this series and piling that on top of a disjointed script where people act out of character, fight for no real reason and seem to do things for no motivation greater than "it's what the plot demands they do"? A recipe for disaster. The much-hyped end of the "first chapter" of Avengers vs. X-Men concluded with a number of Marvel mutants being tapped as hosts for the Phoenix Force, after Hope Summers--who had been the presumptive host--begged Wolverine to kill her, as she was unable to control the power of the Phoenix. She's clearly still playing a major role, as by the end of the issue she's been taken away by the five new Phoenixes, who speak in a stilted voice to communicate to the reader that they've been taken over by The Phoenix. Of course, Cyclops has been talking like that all along and up until now everyone has just assumed it was merely bad dialogue. In the end, will we find out this whole crossover was manipulated into happening at all? The out-of-the-blue ending may be excited to the merry Marvel faithful, but reading the story with a critical eye it just seems like yet another variation on the theme of Blackest Night and Fear Itself--take a powerful item that can change a character's appearance, give them new powers and put a whole different spin on their personality(albeit briefly), and give it to whatever random characters the writer thinks might look cool in new clothes. The first time around, that kind of gimmick is kinda neat--seeing what The Atom and Batman would look like if they had power rings or whatever. The second time, it starts to wear thin as all the costume changes seem unecessary when you know for a fact Colossus won't keep his Asgardian toy at the end of the thing; by the third time, it's just another tired trope that needs a break before it can be impressive again. 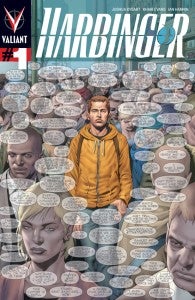 Harbinger #1 (Valiant) - ****1/2 Valiant seems to have cracked some kind of code, here: their summer of Valiant is only three issues deep, but they're three very good issues. Harbinger #1 jumps all over the place, dealing with the mythology behind the character and his powers, and then the more practical aspects of having a kind of telepathy that you can't turn off. It's a bit like the early Sookie Stackhouse novels, back when she still worried about that sort of thing, except with superheroes, and there's a very honest, human moment when he tells his junkie friend that he has to remain a drug addict becuase being around him when his brain is screaming for a fix during withdrawal is just too difficult. Writer Josh Dysart crafts a fascinating and strange, yet believable world for the story to take place in, complete with--of all things--a reference to Bat-Mite. Artist Khari Evans turns out a great-looking book that's uneven in places, but at its best evokes a bit of the creepy, gross-out cleverness of Travel Foreman's recent Animal Man run. The near-constant barrage of thoughts surrounding Peter (our hero) is a fascinating visual--the kind of thing that's got to be keeping Dysart and letterer Rob Steen busier than they ever would have guessed before starting the title. It's also almost begging for a more permanent move to the country, just to keep the character's sanity. That in and of itself could be fascinating because obviously most comic book stories happen in big cities and the challenges to an artist to keep things visually interesting change completely in a different setting like that. The lead character is not a traditional hero in any sense; he's on the run from the law, and possibly from things bigger than that, when we meet him and uses his mind powers (think the Word of God from Preacher, where he just stares and whatever he orders, however insane it is, becomes law) to do a number of shady things, ranging from the necessary evils (self-medicating and forcing the pharmacist to provide the drugs) to the downright skeevy ("Fall in love with me"). 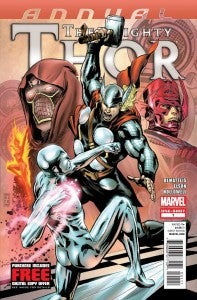 The Mighty Thor Annual #1 (Marvel) - **** Writer J.M. DeMatteis rarely disappoints, and this is not an exception. The first annual since retitling and renumbering the two Thor books around the time of the character's movie last year, there's a more timeless Marvel quality to the issue than anything I've read in Thor since Straczynski relaunched the character. Recent stories have--the ones that haven't been wrapped around a morass of impenetrable Marvel continuity--seemed like they were trying too hard to be "current" and feeling less like Thor as a result. There should be a kind of timeless, almost old-fashioned aesthetic to the title. It's based on characters that are thousands of years old! It's also a truly cosmic Marvel story in a lot of ways, which is good for Thor. Often, outside of his fellow Asgardians or a big crossover, few villains feel like they're truly a threat to a character on his level of power. Not so this time around when you've got Galactus (one of Marvel's most popular and powerful villains), and the being that creeps him out! Ultimately it boils down to a very original and beautifully-rendered take on a war of alien aggression, with sleeper agents thrown in for good measure and some great, creepy visuals. There are also, though, some great character moments in the book. They ought to get DeMatteis and Richard Elson on Thor for a full run; not only did I enjoy this book, but I'll pick up the next part of the story...something I haven't said about a Thor comic in I'm not sure how long. 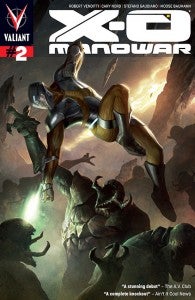 X-O Manowar #2 (Valiant) - ****1/2 My first thought, upon reading the second issue of X-O Manowar, is that this comic is pure storytelling without restraint. A sexy opening sequence shows off part of artist Cary Nord's skillset that we hadn't yet been able to see; following that, there's some pretty harsh stuff, including graphic and painful violence directed at our hero. Moose Baumann outdoes himself with the colors on this book, dealing well with the understated and muted colors of the prison versus the vibrant ones in the field and the final sequence. Then, in the middle of the issue, a caption says, "Years later." Aric has spent years in jail to accommodate when Robert Venditti wants to do with this story. Notably, no other review that I've seen has made much of this. When Booster Gold was transported to the future during Keith Giffen and J.M. DeMatteis' run on that title, he served five years in prison and there was a palpable anger among fans who wanted to know where the writers got off, taking the character off the board for all that time and aging him ahead of the rest of his DC Universe counterparts would be a continuity sticking point. Those years, anyway, are not kind to Aric, who organizes a prison escape which sets the stage for everything that comes next. I guess it's time to find out whether the X-O armor can replace lost limbs...! Check back later in the day for a look at some of this week's issues, including The Massive #1 from Dark Horse!